Great concept with some five star moments let down by a couple of one star annoyances. 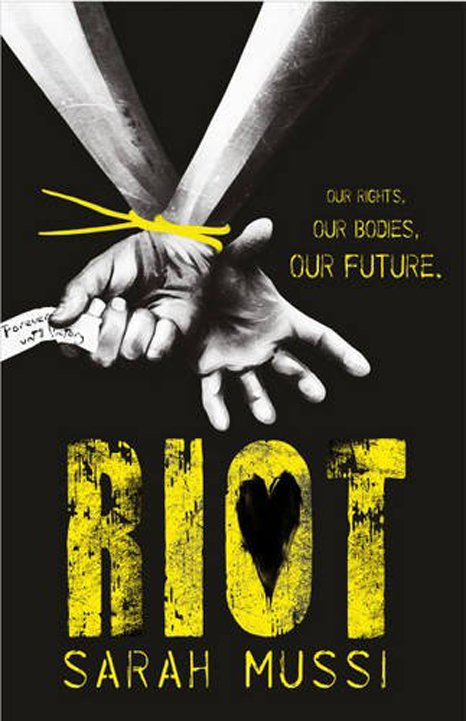 It is 2018. England has been struggling under a recession that has shown no sign of abating. Years of cuts has devastated Britain: banks are going under, businesses closing, prices soaring, unemployment rising, prisons overflowing. The authorities cannot cope. And the population has maxed out.

The police are snowed under. Something has to give. Drastic measures need taking.

The solution: forced sterilisation of all school leavers without secure further education plans or guaranteed employment.

The country is aghast. Families are distraught, teenagers are in revolt, but the politicians are unshakeable: The population explosion must be curbed. No more free housing for single parents, no more child benefit, no more free school meals, no more children in need. Less means more.

OUR RIGHT TO CHOOSE, OUR BODIES, OUR FUTURE

I’m not even sure where to start with this one. I’m in two minds about it. On one hand, there were some really great moments in Riot that I thoroughly enjoyed. Plus, it’s a quick, easy read and I’m pretty sure it’s a standalone. But goodness me there were some terrible moments too, mostly caused by poor writing or what seemed to be a lack of thought.

I guess I’ll start with the thing that annoyed me the most, then. It’s the flipping use of the word flipping in every flipping sentence. I mean, who flipping says flipping that much? I was reading an uncorrected proof copy so it’s possible that some of the flipping got cut out, but that would make the book about half the length. Just thinking about it now is making me angry again.

The moments that seems like a lack of real thought from Sarah Mussi were mainly holes in the character of Tia, our protagonist. She’s supposed to be a tech wiz and a hacker, but there are times when she’s so careless with her phone or on the internet that it’s just too difficult to believe she could actually know anything about technology.

Now that I’ve got the moaning out of the way, we can talk about the good bits, and there are quite a few to make up for the aforementioned downfalls. One is the concept, though perhaps being set just four years from now is a little crazy. I think the idea that the government could come up with a plan to prevent overpopulation and that the plan would be to sterilise a more troublesome portion of the country’s citizens is actually not that absurd. Just think about the policies in China and we’re half way there.

Alright, I’m pretty sure no one in the UK (where Riot is set), or anywhere else for that matter, would agree with getting the ‘snip’ as they call it in the book. It would be incredibly difficult to enforce, but I enjoyed that Riot explored what would happen if such law really did get put in place.

I also liked the relationship between Cobain and Tia, as well as her troubled (to say the least) relationship with her dad. There are some really brutal bits throughout the book too, which I thought helped add a gritty feel to it and made the threat of the government’s power more real and frightening.

Overall, it’s difficult to say whether I liked Riot or not, which is why I’m giving it three stars. Those three stars are not because it was mediocre all the way through. There were some five start bits in there, for sure, but there were some one star bits too. I’d say give this book a shot if the premise intrigues you, but don’t expect a mind blowing read.

You might like Riot, if you enjoyed one of the following. Alternatively, if you’ve read Riot and enjoyed it, here are some recommendations for your TBR list.