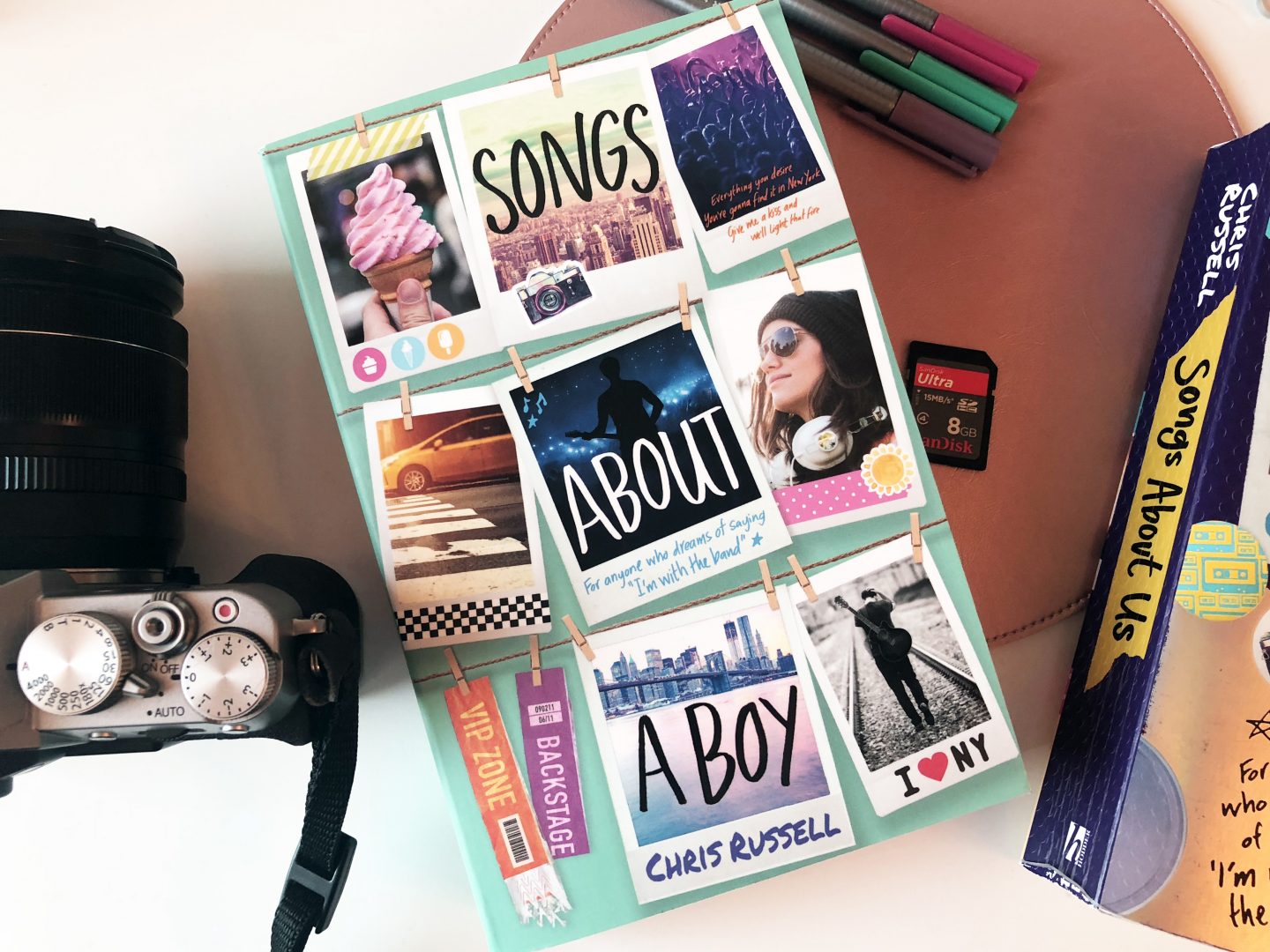 Songs About A Girl author Chris Russell shares what it was like to say goodbye to the trilogy’s characters in the third book Songs About A Boy, how difficult it was to get the ending right when there’s such a divide between #TeamGabe and #TeamOlly from readers, and which celebrities he’d like to take out on a date.

It took no time at all for me to fall in love with Songs About A Girl and its wonderful characters when I first picked up the book in 2016. It was Chris Russell’s debut novel, and boy what a debut it is.

It follows Charlie Bloom as she gets swept away by the excitement of her new gig as the backstage photographer with the hottest boy band in the world: Fire&Lights. Expect swoon-worthy romance, adrenaline-filled adventure and mind-blowing mystery. What more could you want?

It ends on one hell of a cliffhanger, so I read it for a second time just before Songs About Us landed on my doorstep in 2017, then ditched everything else to dive straight in and find out what on earth was going on.

The second book was just as great as the first, so when I reached the last page and another cliffhanger, the countdown began for the third and final instalment: Songs About A Boy.

Now, the wait is finally over – you’ll be able to get your hands on the epic conclusion to the story on 9 August! You can order your copy now from Amazon or Waterstones.

To celebrate, I’ve joined the Songs About A Boy Blog Tour and have a Q&A with none other than Chris Russell himself. Be sure to follow @chrisrusselluk and @teambkmrk to follow the rest of the blog tour and beyond. 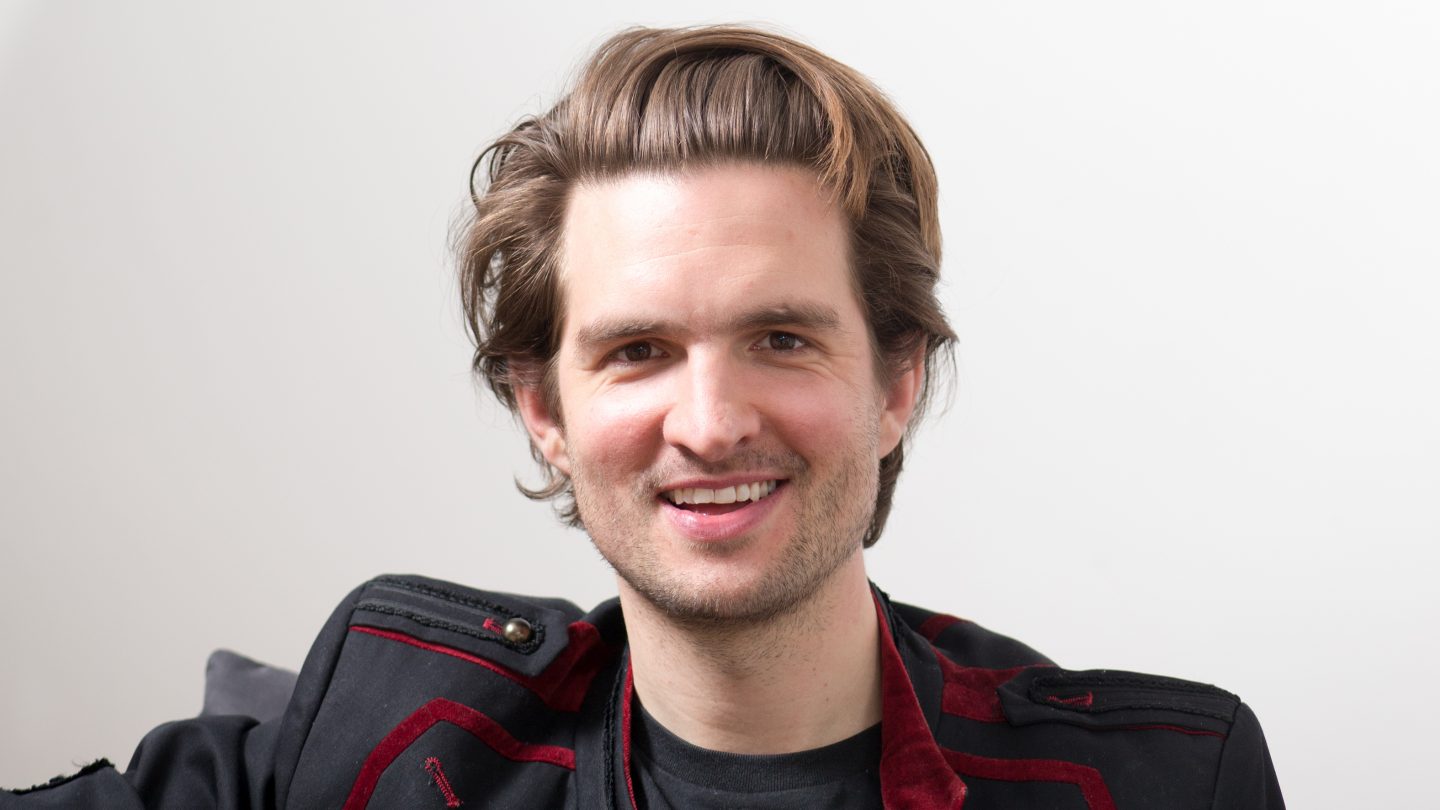 How does it feel to say goodbye to the characters you’ve spent so many years with? Is this really the end for Fire&Lights and Charlie Bloom or will we see more from them in the future?

It’s bittersweet! It’s a cliché to say it, but these characters are so embedded in my imagination now, I don’t think they’ll ever leave. I feel like I’ve left Charlie Bloom’s universe exactly where I wanted to, though, so I don’t see myself writing any more books about her. I think, for authors, there’s a certain skill in leaving characters behind at the right moment. And for Charlie and the gang, this is that moment.

How did writing the third book compare with your experience writing the first and second? Did you learn anything from the writing/editing/publication process that changed the way you approached it? Which did you most enjoy writing?

I have a pretty rigorous method for planning and writing novels, so from a mechanical point-of-view, it was fairly similar. But psychologically, it was completely different. When I wrote Songs About a Girl, I didn’t know if anyone would ever read it – apart from my agent, and possibly my mum – but the backdrop to writing the finale was having people out there who were invested in the story. People to whom it mattered that I got it right. And that’s scary, and amazing, and nerve-wracking and, ultimately, the greatest thing in the world. I’m incredibly lucky. I’ve enjoyed writing each and every book, but there’s been something pretty special about rounding off the trilogy.

Did the trilogy end the way you always imagined it would? There is a definite Team Olly/Team Gabe divide – how hard was it to ignore what the readers were saying and stay true to the story?

The ending is different from how it was when I first planned it in 2015, but I guess I always expected that might be the case. You have to let a story breathe; you have to allow the characters to guide you, subtly, as the story weaves and dodges towards its conclusion. And not just the characters, but your readers, too; your own experiences; the world around you; your emotions, thoughts, dreams and fears. Everything feeds in to the machine. Ultimately, it took me a long time to get the ending right, but I’m really happy with how it’s panned out. (How’s that for a non-committal politician’s answer?!)

You are the master of cliffhangers, both chapter-ending and book-ending. What’s your secret? (It’s some sort of evil genius imo).

The principle of cliffhangers is pretty simple, really – when you answer a question for the reader, always ask two more (or three, or five!). The bit that’s difficult is making cliffhangers an organic and believable vehicle for your story. If it looks like they’ve just been stuck in there as a cheap trick, your readers will feel manipulated. The quality of the writing should do all the heavy lifting.

How has being an author compared to your expectations?

I love it. I know I’ve already said this, but I feel very lucky – it’s an enormous privilege to be a published author. It’s crazy hard work, and transferring those words to the page never gets easier, but the rewards are worth it.

What has been your favourite memory so far?

I think my favourite moment so far (if you’ll forgive me massaging my ego for a moment!!) was when I walked into YALC last year and heard someone whisper “Oh my god, it’s Chris Russell!”. Sadly, no one else was there to witness it, but it did happen. Honestly.

What’s next? Do you have any more tales to tell? Any more stories up your sleeve?

I have lots! There’s one in particular that I’m planning to tell next, although I can’t talk about it at the moment. Watch this space for updates!!

If you could choose three celebrities to take on a date (separately, not all at once!), who would you choose?

Samira Wiley (from Orange Is The New Black) – because every time I see her on TV, she makes me grin like a maniac.

Rachel Bloom (from My Crazy Ex-Girlfriend) – because I bet she’d be an absolute riot. And then she’d write a song about it.

The Haunting Of Hill House by Shirley Jackson. Creepiest thing I’ve ever read.

DON’T MAKE ME CHOOSE. Nah, I’m kidding. I love this kind of thing. If I had to narrow it down to one – if I had to – I think I’d probably say “Loco In Acapulco” by the Four Tops. I know that song’s kinda cheesy, but we used to listen to it in the car when I was a kid, and it just makes me happy every time I hear it. (I think the relationship between music and memory – particularly when it comes to songs that remind you of childhood – is totally fascinating, which is why Charlie and Gabriel talk about it in the books.)

When I was writing my first book, Mockstars (a rock ’n’ roll comedy inspired by my tour diaries for The Lightyears), a friend put me in touch with John Howlett, an acclaimed author and screenwriter. This was the first time a “proper” writer had read my work, and I was a little nervous – “Is this the moment I find out that I can’t write for toffee?!”, etc! – but he gave me some wonderful feedback and it boosted my confidence no end.

The thing that stuck in my head most, though, was something he said to me before he had even read the draft: “Bung it over, paper or electronic. But only on the condition that you take no notice of what I say”. The fact that a professional author was pointing out that his opinion wasn’t the be-all-and-end-all taught me a very, very important lesson about writing – that nobody has all the answers. Which is because “all the answers” don’t exist. You just have to find your own path.

Not sure this is exactly counts, but it popped into my head, so here we go. When I was about 7 or 8, our primary school teacher asked everyone in the class to write a story. She read a selection of them out loud afterwards, including one in which the protagonist was killed off at the end. It was written in the first person, so the last line was something like: “And then I fell off a cliff and died”. She scoffed at this, telling the class that since people can’t write stories from beyond the grave, the whole thing made no sense.

I remember it felt like she was deliberately trying to humiliate the kid that wrote it (who looked pretty crestfallen), but as you do when you’re that age, I just accepted her opinion as gospel. The experience stuck with me for ages afterwards, until eventually, I thought about it and went … hang on, that’s nonsense! You can do whatever the hell you want. There are tons of well-known novels with deceased protagonists.

So whoever that teacher was … yah-boo-sucks to you, mate. 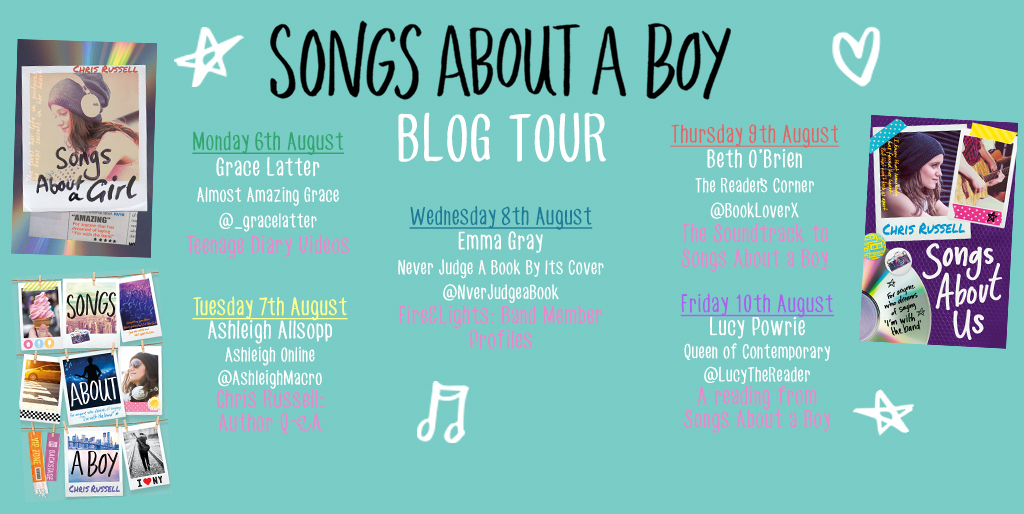 Thank you so much to Chris and Team BKMRK for inviting me to be a part of this wonderful tour. Make sure you follow for the rest of the week, and catch up on yesterday’s post by the lovely Grace Latter.

Wednesday 8 August: Fire&Lights Band Member Profiles with Emma at Never Judge A Book By Its Cover

Thursday 9 August: The Soundtrack to Songs About A Boy with Beth at The Reader’s Corner

Friday 10 August: A reading from Songs About A Boy with Lucy at Queen of Contemporary