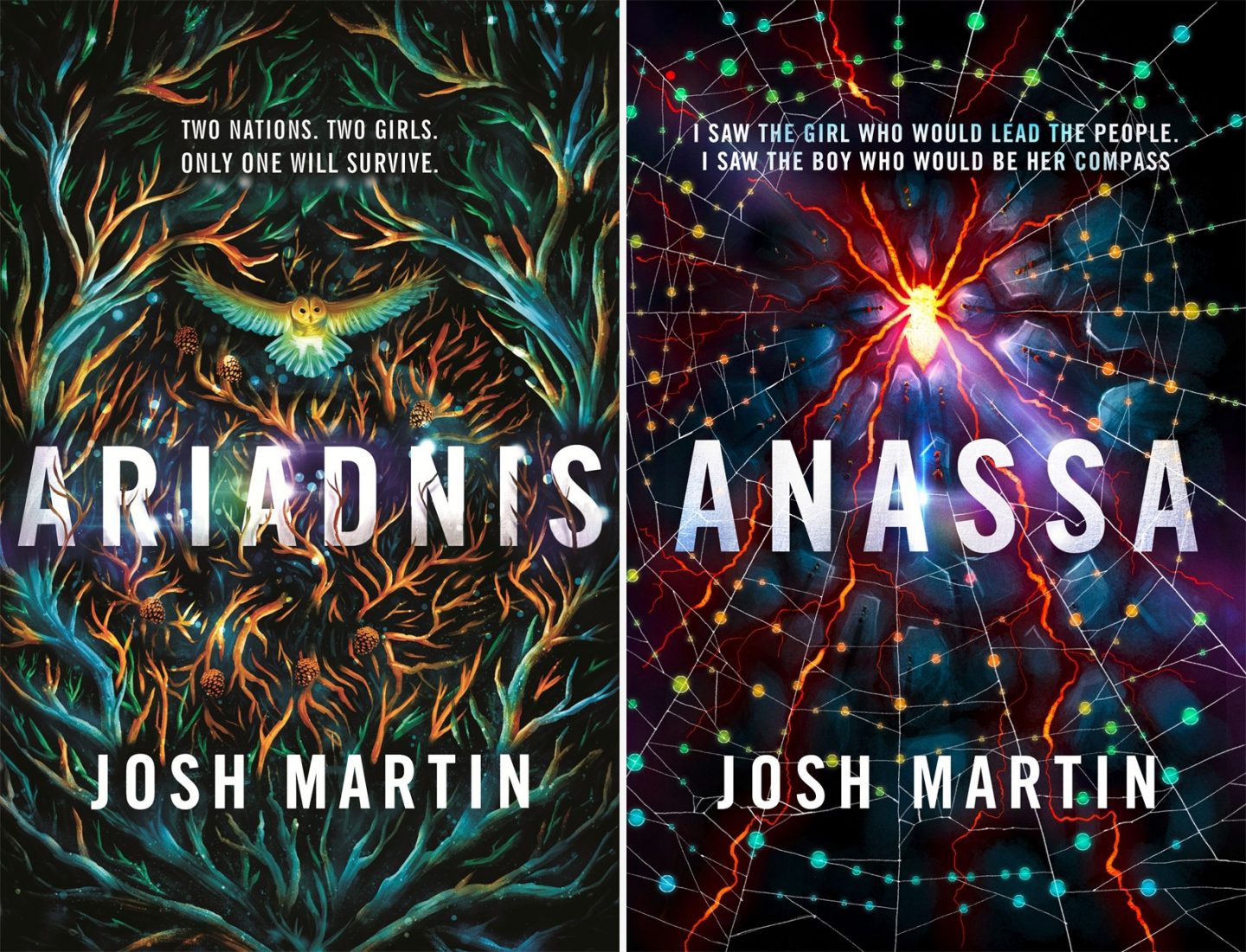 Today I’ve got something a little different to share with you! Josh Martin, the wonderful author of Ariadnis and its sequel Anassa, has been on a blog tour all week, and it ends right here at Ashleigh Online. He’s written an incredibly interesting article about fantasy and the environment, and I’m excited to share it with you below.

But first, let me quickly introduce his novels. The first, Ariadnis, was released a year ago, and this week its sequel, Anassa, is hitting the shelves. They’re packed with magic, prophecy and a thrilling competition. “Two nations. Two girls. Only one will survive.”

Sounds awesome, right? You can grab yourself a copy of Ariadnis here, and Anassa here.

You can also check out the rest of the blog tour by following the links below:

And now it’s my turn! Enough from me, over to Josh.

Did you see Judi Dench’s My Passion for Trees when it was on at Christmas? There are a few strangely cynical online reviews that confess to being quite touched by it, while never managing to steer themselves away from sounding perplexed, amused or sneery.

But until I watched it, I’d never thought that sap and water would make sounds as they travel up from the roots to the leaves. I never knew that trees can actually communicate with each other using a mass of thin, thread-like fungus known as mycelium.

Perhaps it is simply that making trees a focal point isn’t something that many people expect to be engaging? But Dench intertwines her love of trees with Shakespeare’s own love of nature, and it got me to thinking how many other writers use the life-force and inter-connectivity of trees and plants as a trope.

It’s a surprisingly regular motif in fantasy narratives (and one that I used extensively in Ariadnis and Anassa). A recent, particularly breathtaking example on TV was in an episode of Nickelodeon’s The Legend of Korra. In it, our heroine uses her elemental powers to “see” through roots of an ancient Banyan tree for miles and miles in every direction. Ironically, it’s the power of that same Banyan tree which her nemesis, Kuvira, later harnesses for weapons of mass destruction.

And despite the dubious merits of James Cameron’s Avatar; I adored the physical connectivity to environment that his alien race, the na’vi are shown to have via “neural queues” hidden in their long hair. I remember gasping in horror when the na’vi’s enormous “home” tree is bombed (by humans) until it falls to the earth, because of the added connection they are shown to have to their environment – beyond being a place they simply occupy.

I mean, yes, the metaphors are a bit heavy handed, but it’s a good example of how fantasy (and indeed, sci-fi) narratives are unafraid to ally themselves with the natural world, and cast a stern eye back at humanity and everything it does to the environment in the name of “progression”.

I would argue that this is the founding philosophy of J.R.R. Tolkien’s Middle Earth. It’s well documented that Tolkien loved trees – and you can see it in not only in his reverential depictions of forests (Lothlorien, Fangorn, Brethil, Neldoreth etc) but in his depiction of the sentience of trees. Treebeard and the ents remind us that even mute, inert trees are as self-aware and important as walking, talking ones. It’s no wonder that it’s so magnificently satisfying to watch the industrial hellhole Isengard being taken down by said creatures – the ultimate expression of what we see as the avenging spirit of nature.

It goes without saying that I’d internalised much of this mythological morality before I came to write my first book, Ariadnis; so I wondered how I was going to stay or break with this tradition. Technology, industry and progression are, like all themes, only bad or good depending on context you give them. So I knew when I was posing Metis, my natural, green-magic, grown-out-of-the-bark-itself city against the steam-powered, metal-encased Athenas, that I didn’t want to be as divisive as implying that one is better than the other.

I took some of my favourite portrayals of this seemingly eternal struggle to see if I could see a commonality between them. Stories like the aforementioned, but also Ursula K Le Guin’s Earthsea books, Hayao Miyazaki’s Princess Mononoke and Patrick Ness’s Chaos Walking series. And all of them seem to come back to the same point: that humans only do harm in our environmental interactions when we forget that we are part of that environment. It is so easy to forget, because we are such an unusual species, to imagine that we are somehow on another plane to the flora and fauna around us. On the other hand, it seems to me just as easy to demonise ourselves for our insatiable desire to invent, imagine and implement.

So with Ariadnis, and subsequently, Anassa, I have tried to walk along the same wavelength as these wonderful stories before me, albeit a different path: to suggest that we must find balance, above all things in the way we conduct ourselves in our environments – and that we never forget that we might help the environment just as much as it helps us.

Have you heard of Boyan Slat? He founded the Ocean Cleanup project. He aims to harness the power of the tides to collect the shocking amount of plastics circulating in the Pacific Ocean. He’s still a young adult. He may well be about to avert man-made ecological disaster just by working with the rules of that environment.

There’s no better metaphor I can come up with here. Once I’d come to appreciate that technology doesn’t have to be antithetical to nature, I realised there was a much broader, nuanced narrative that I could tell with these stories.

Get Ariadnis here, and Anassa here.