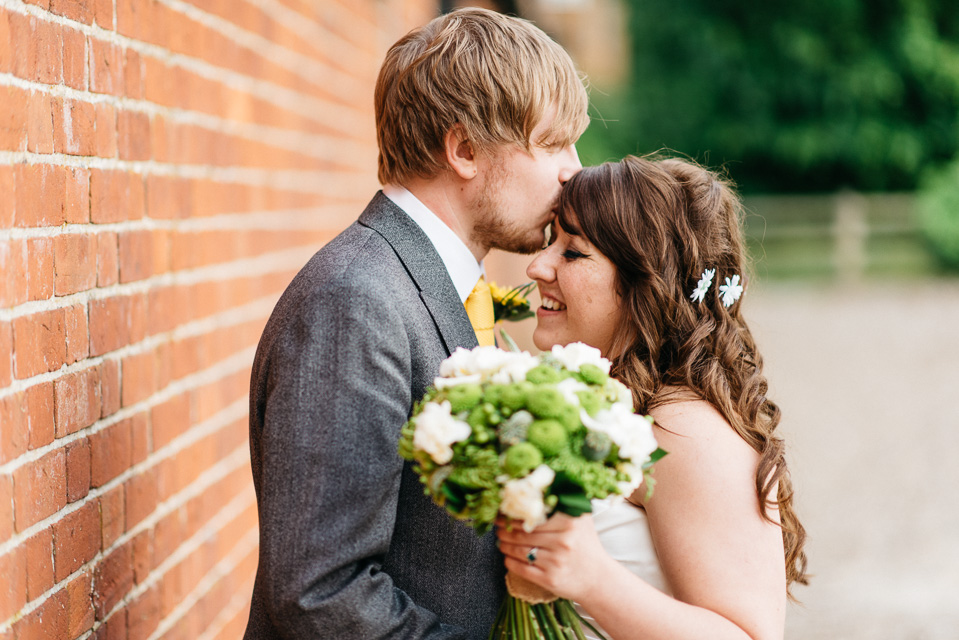 I’m so excited to be bringing you my first ever Real Wedding here on Ashleigh Engaged, and even more excited that this Real Wedding is such a gorgeous one. Emma, an exhibition designer by day and a netball player, photographer and card-maker by night, and Alex, a web designer with a love of American football and brewing his own beer, tied the knot back in June and I was lucky enough to be there to help them celebrate, as Emma is a good friend of mine from my college days.

Emma and Alex met on Good Friday in 2009 in a club called The Pink Toothbrush, where they were partying the night away. Both had come home from university on their Easter break, so during the first two years of their relationship that began just weeks after they first met, they lived 200 miles apart as they finished their degrees at separate universities. 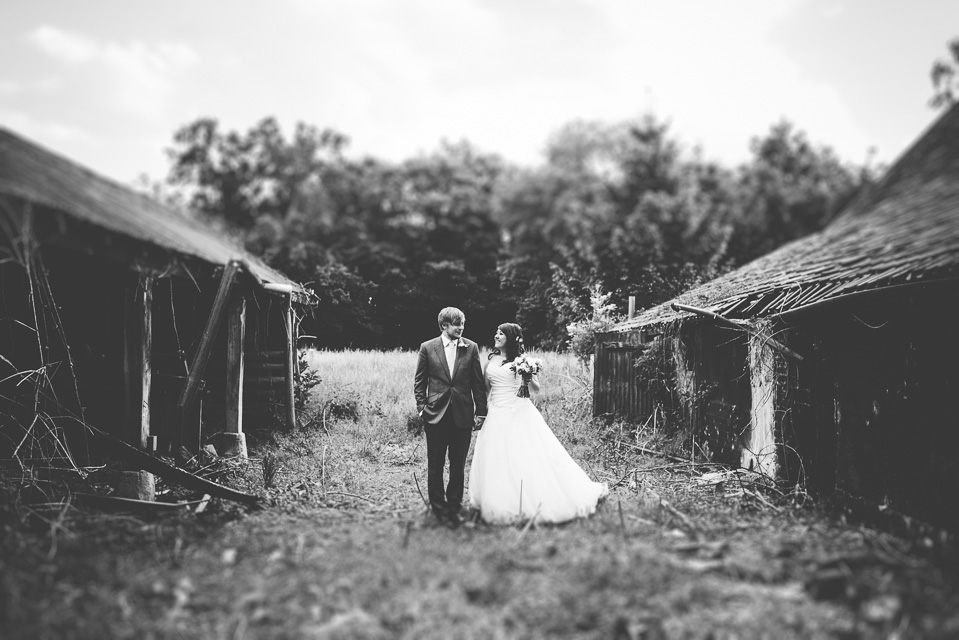 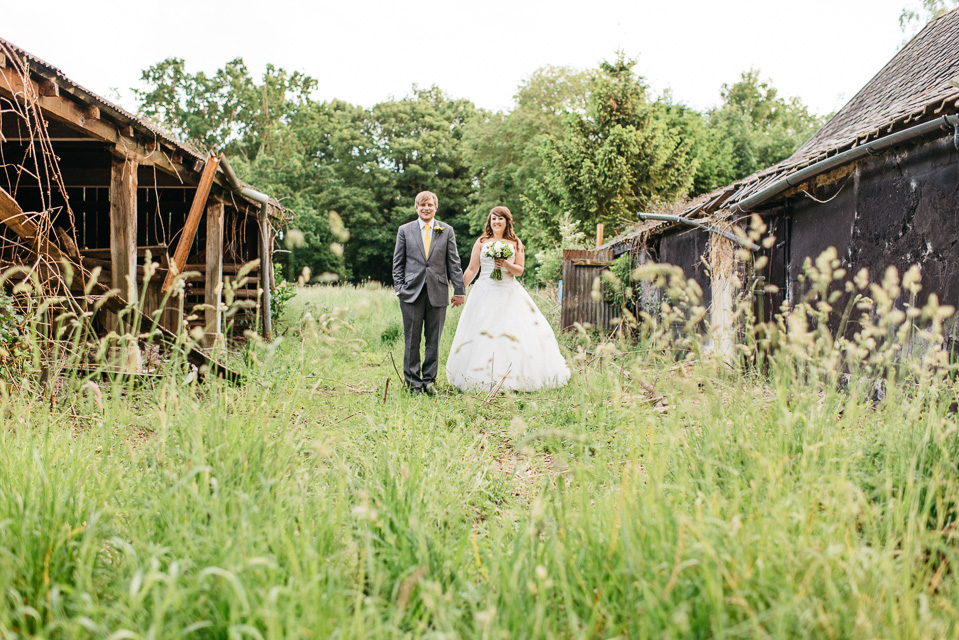 On their fourth anniversary, Alex woke Emma up with a suitcase and a train ticket to meet her in London after work for a long weekend. “As soon as I met him and we checked into the hotel, I put my suitcase on the bed and turned around and he was down on one knee!” Emma told me. “He was intending to wait until the restaurant, but he was so nervous that I might have felt the ring box in his pocket when I gave him a hug that he did it straight away. He had already been to my parents three days before to ask their permission!” 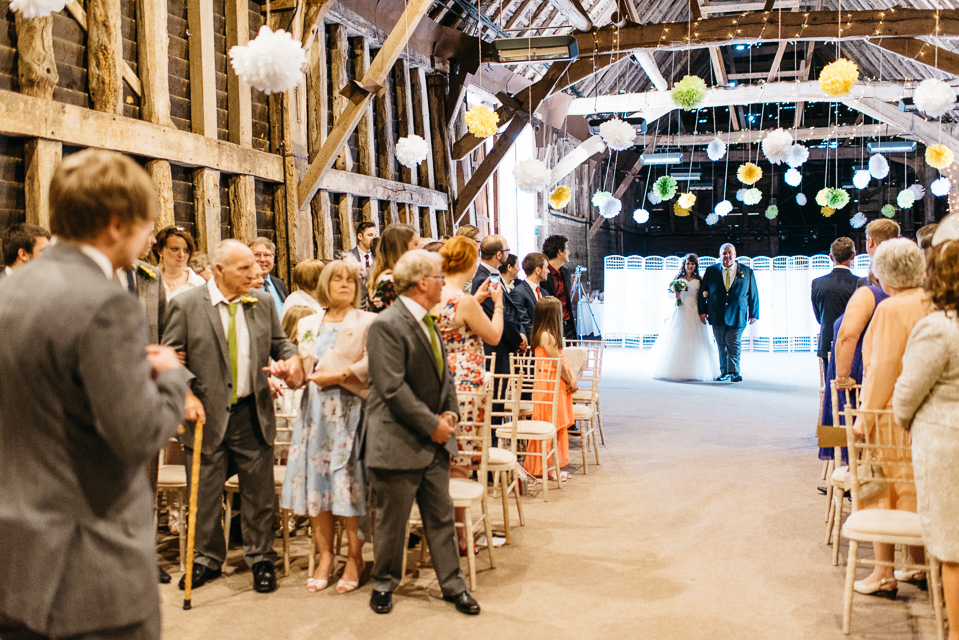 Two years later, Emma and Alex met at the end of the aisle and said ‘I do.’ 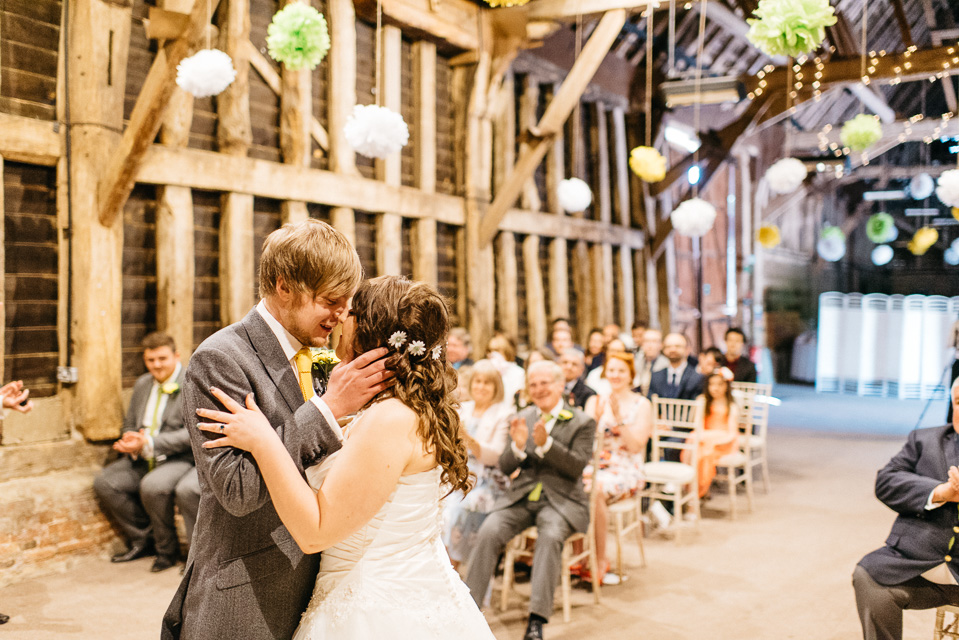 Emma has kindly shared lots of the details about her wedding day to help inspire other brides-to-be, so here you’ll get the chance to pore over the stunning photos and find out how Emma and Alex achieved such a fresh, fun feel to the day that everyone loved. 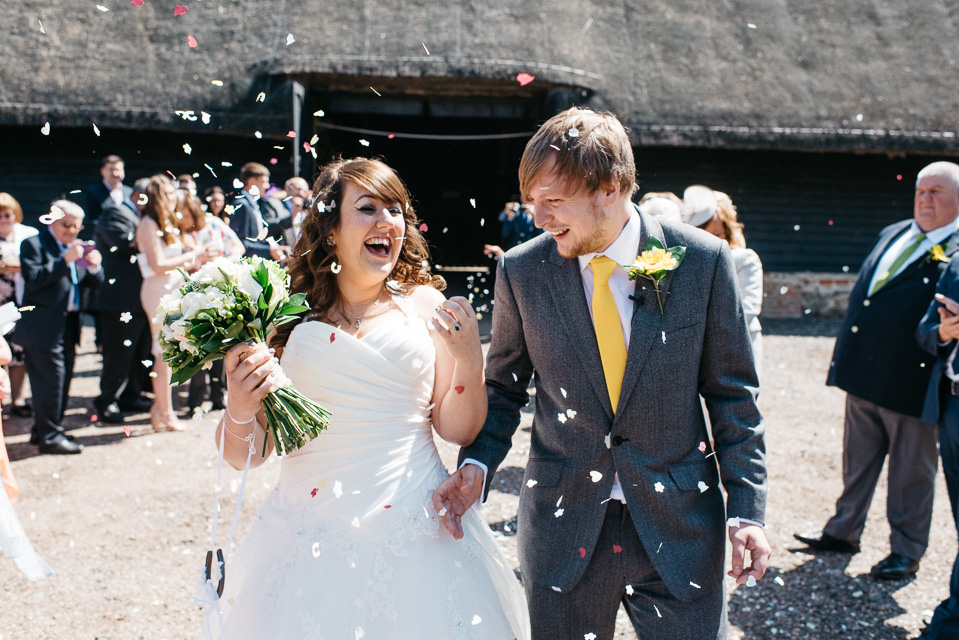 Emma and Alex had planned to spend around £12K on their big day, but in reality it ended up costing around £13K. I think £1,000 over budget is super-impressive! I asked Emma how she managed, and her answer arrived in the form of an incredibly detailed spreadsheet that puts me to shame (but has inspired me to start one! Better late than never, right?).

She said: “We worked out exactly what we wanted to start with, created a budget and mostly stuck to it. It evolved a little bit as ideas changed slightly as we went along, but mostly it was as we first imagined it. We did manage to cut a lot of costs by getting married in the same venue as the reception, which cut out transport costs. Doing our own decoration and planting our own table centres were huge money savers. We also designed the stationery ourselves and used one of my suppliers at work who did us an amazing deal.”

When I asked if there were any unexpected costs, Emma said: “We had never planned to have a videographer as we thought it would be too intrusive, but about three weeks before I had a complete change of heart and booked one at the last-minute! It was completely unexpected.” 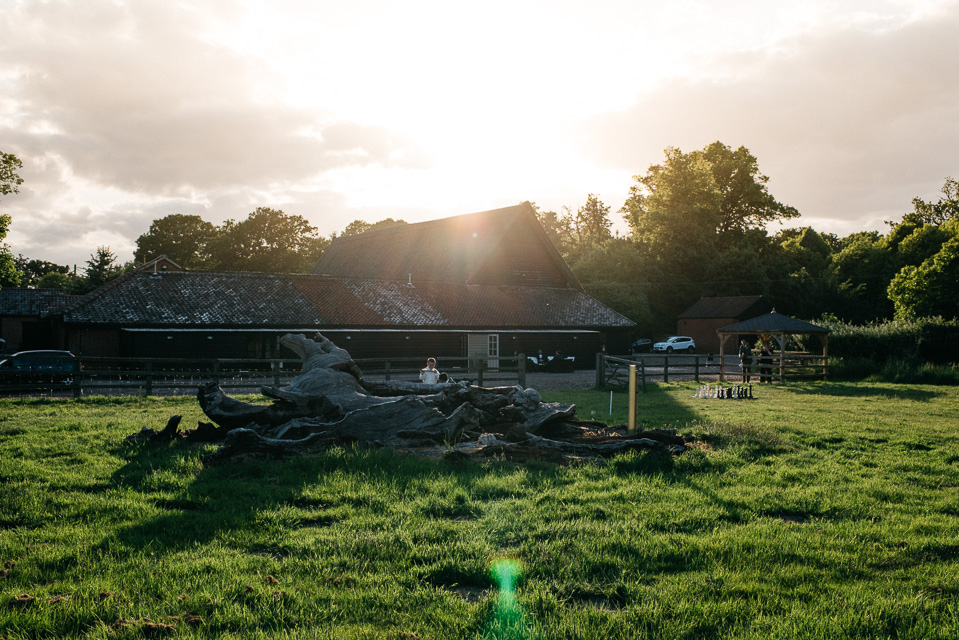 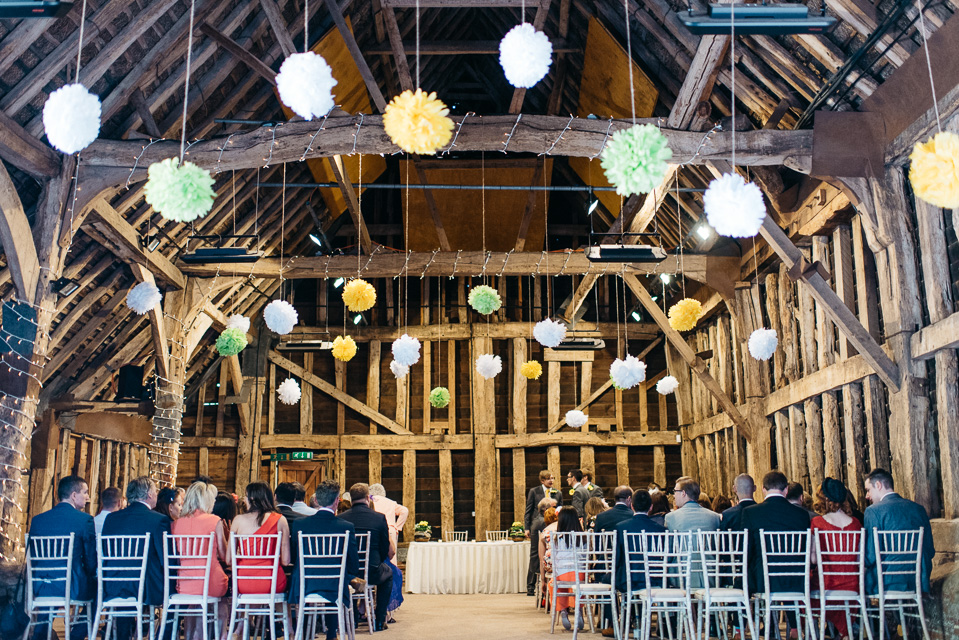 Emma and Alex picked the gorgeous Blackthorpe Barn as their venue, and I thought it suited the couple perfectly. They wanted a rustic, natural feel to their wedding and they certainly achieved it. They investigated about 30 different venues online and went to visit four or five. “We looked at a few barns but they were restored and much more finished. We loved the rustic feel with the raw beams and thatched roof, even down to the bats and the wood worm! We loved the idea of throwing the barn doors open and letting the sun shine in. Fortunately we had the weather to do it. Blackthorpe Barn was just starting its wedding business at the time and we got a fantastic deal – it definitely helped that we could have the vision we wanted for a cost we could afford.” 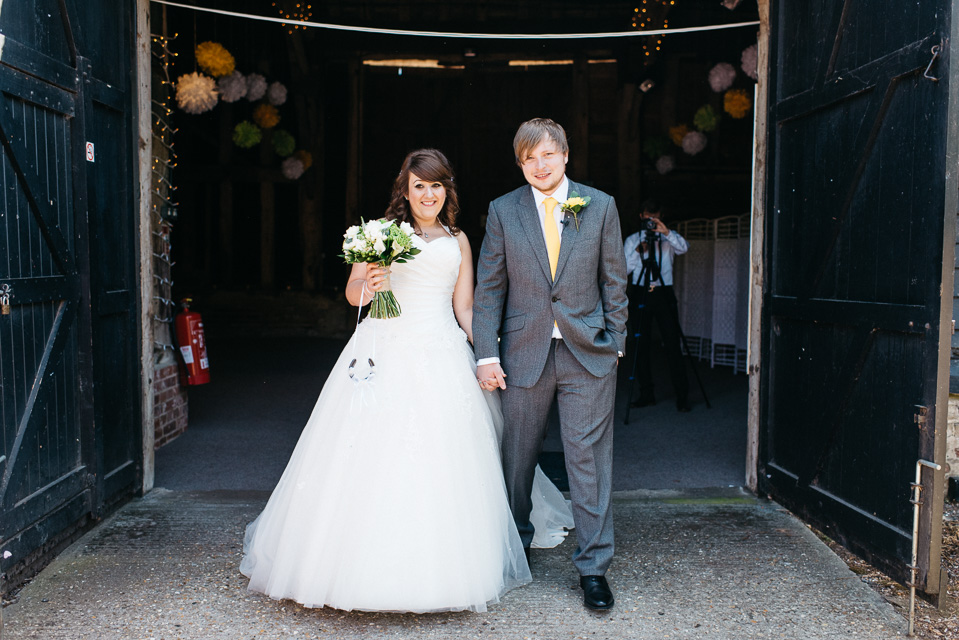 Emma purchased her amazing dress from Serena Bridal in Wickford, after meeting them at a wedding fair in Bluewater. She booked an appointment right there at the show and as a result got a voucher for 50% off her bridesmaid dresses if she brought her dress from them. (Read more about wedding fairs here). Luckily, Emma found that their service was exceptional and she fell in love with dress number two! 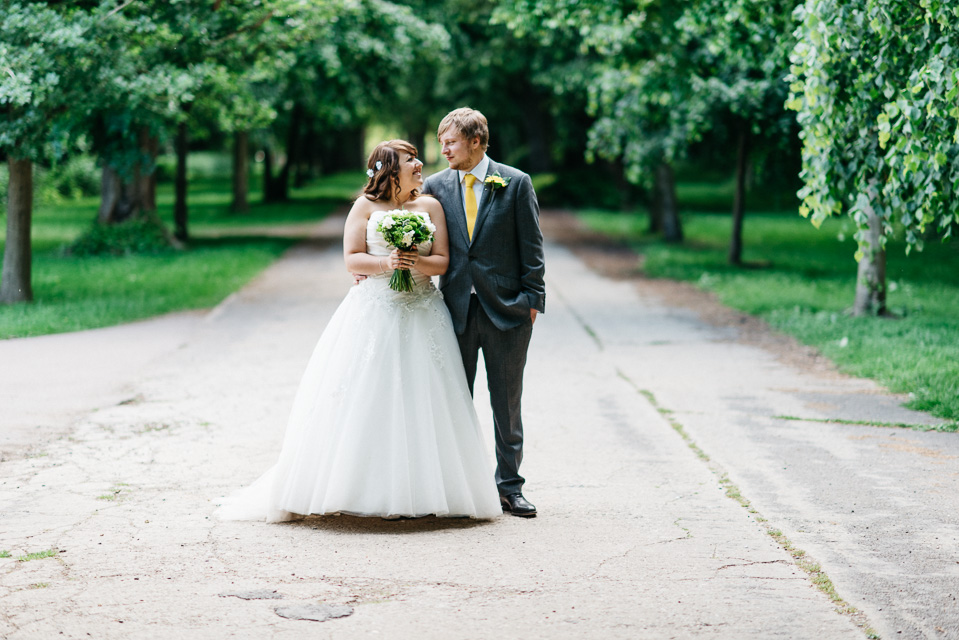 “I was adamant wanted high waisted with an illusion panel across the shoulders,” she said. “I tried on the one I loved from a magazine and absolutely hated it! The shop owner suggested I try another style as she thought the drop waist would be flattering on me and I fell in love with it. I tried on two more afterwards, just to make sure, but we paid the deposit there and then.” 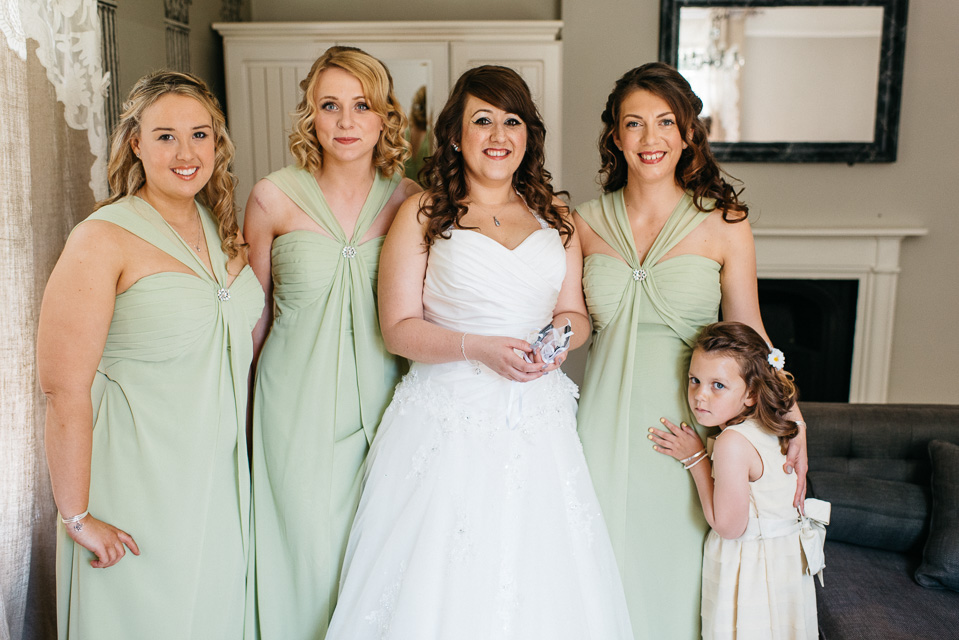 Emma had three bridesmaids and a flower girl. Her bridesmaids were her two best friends and Alex’s sister, and her flower girl was one of those bestie’s gorgeous 5-year-old daughter Daisy. Their dresses came from Serena Bridal, and thanks to that aforementioned voucher they were 50% off.

Daisy’s dress was from BHS because Emma didn’t want her to wear the traditional white flower girl with coloured band dress. “All of the girls brought their own shoes as the dresses were long, so we decided that they would wear what they were most comfortable in and it didn’t matter whether they matched or not.” 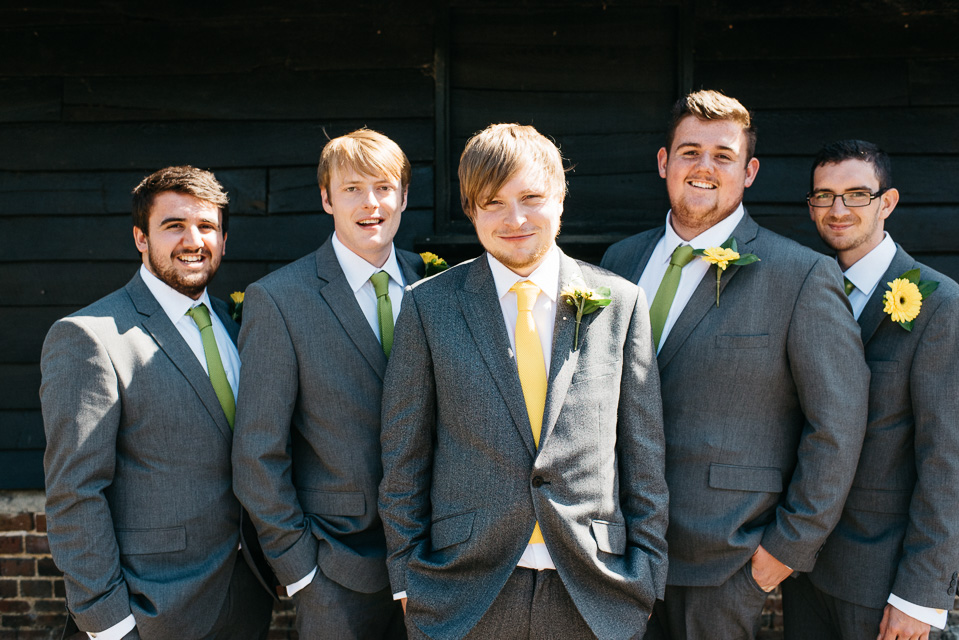 Alex’s suit was from Reiss, and the best men and ushers wore suits that were a close match from Debenhams. They all brought their own black shoes and their ties were hand knitted from eBay as Alex preferred the shape of the woven woollen ties. 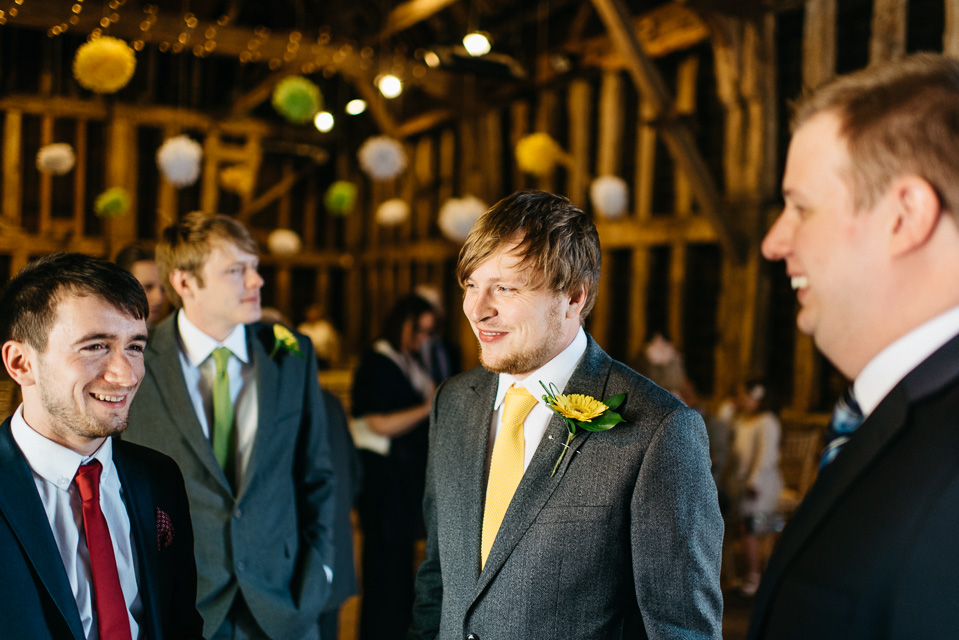 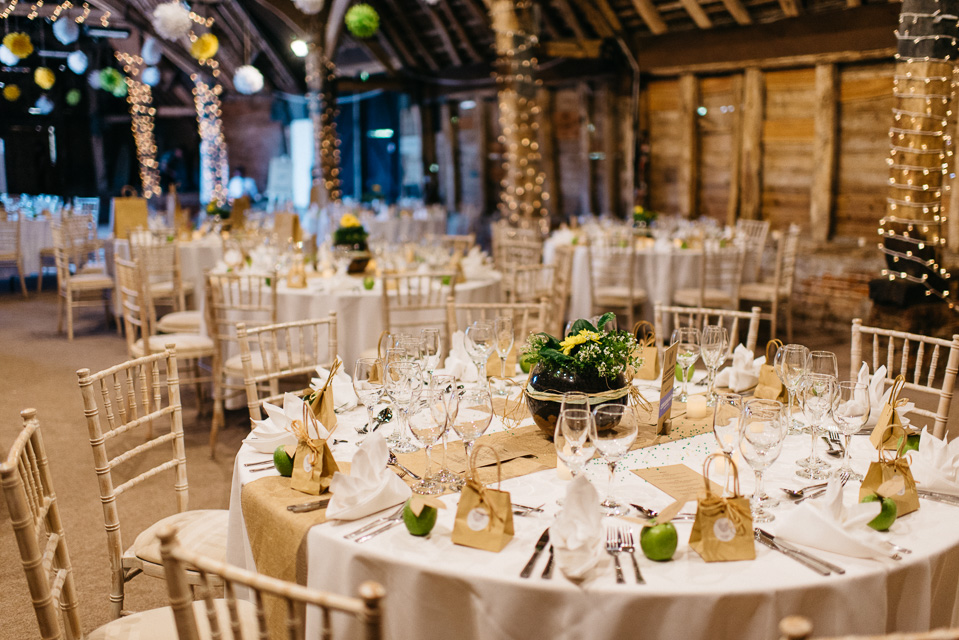 Emma and Alex didn’t have a specific theme, as such, but they wanted to combine the rustic elements of the barn with their modern and creative style. “We went for fresh spring colours – think lemons and limes – but used lots of hessian, brown string and kraft recycled paper to keep the natural rustic elements.” 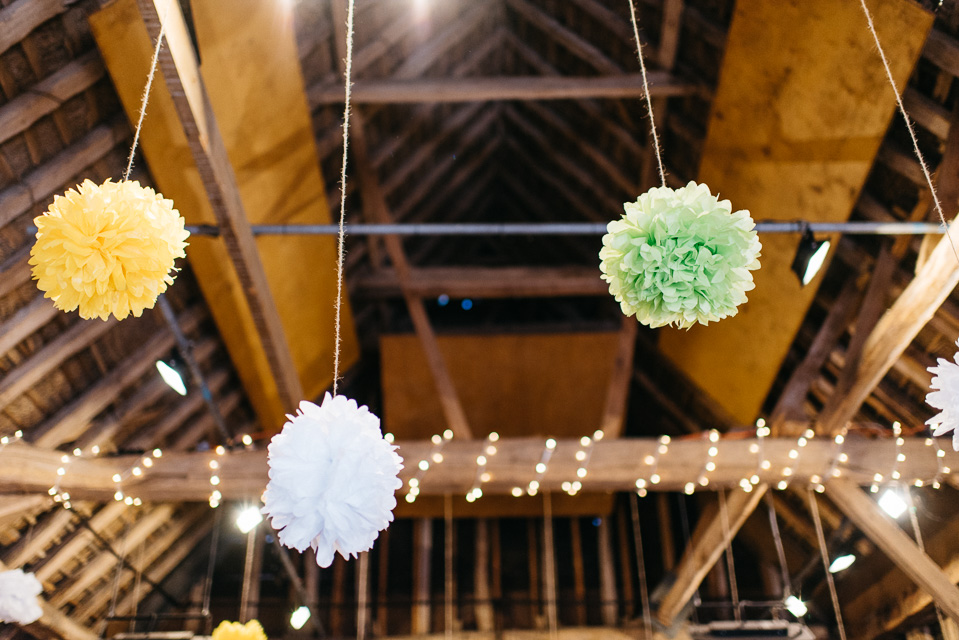 Emma handmade 66 tissue pom poms in lemon, lime and white on long brown string, which the venue then hung from the beams inside the barn. “The bridal party and I spent the day before the wedding puffing them up while drinking champagne!” 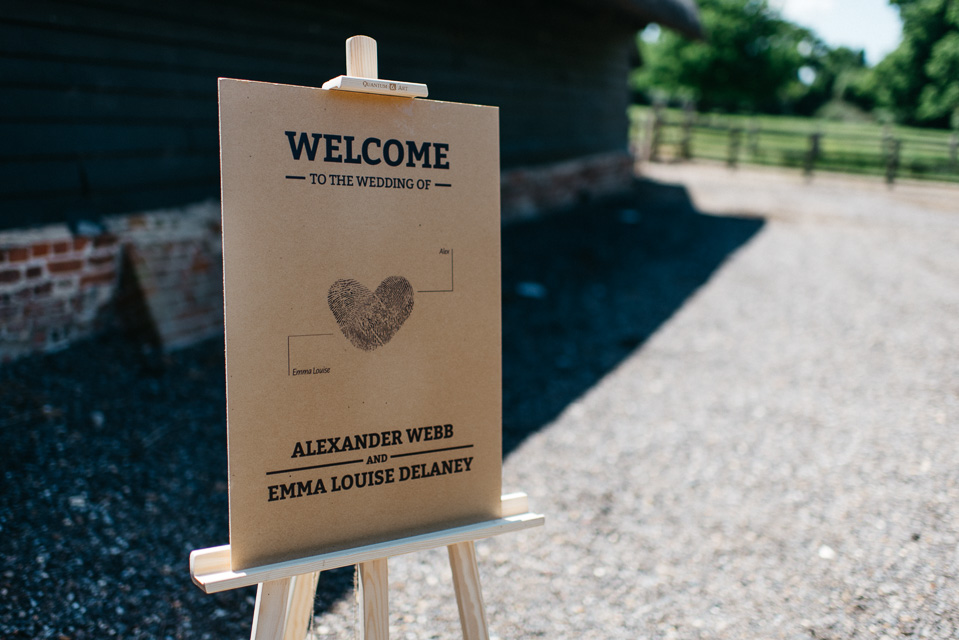 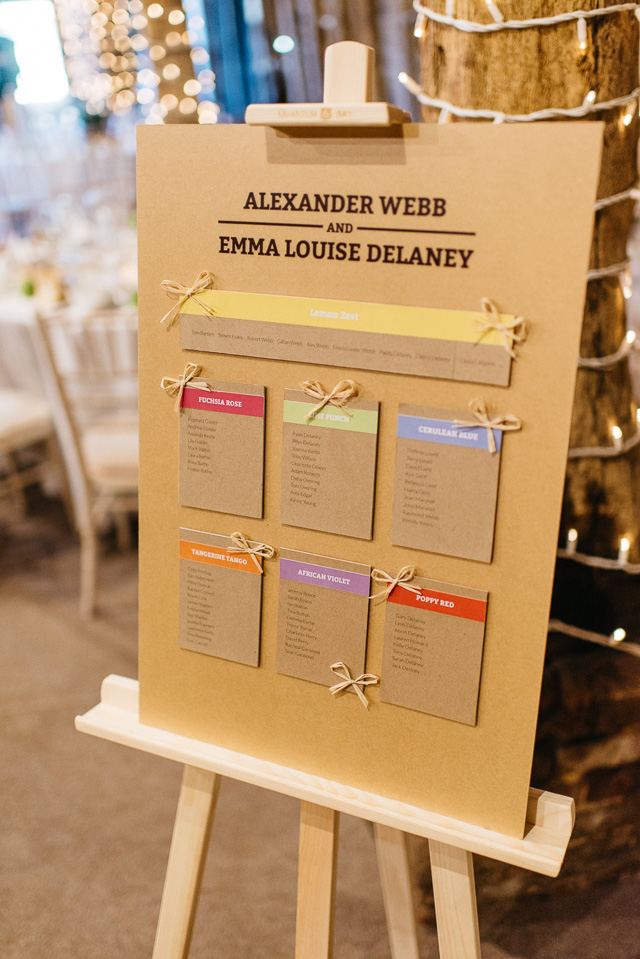 The table centres were glass fish bowls with layers of sand and stone, planted with Gerberas and finished with lemon and lime ribbons and brown string. They used flickering, real wax LED candles (they weren’t allowed real candles due to the thatched roof!), hessian table runners and bright table gems as finishing touches. 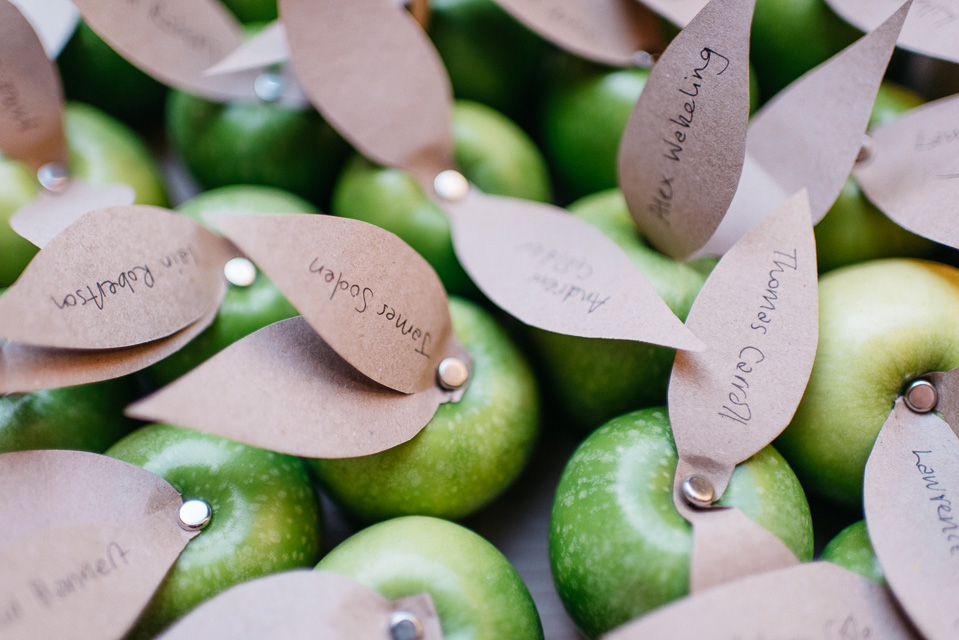 For favours, the couple used brown paper bags with ribbons for sweetie favours – inside were lemon and lime bonbons. They also used green apples with paper leaves for the placeholders, while small branch stumps held the table names and menu cards. 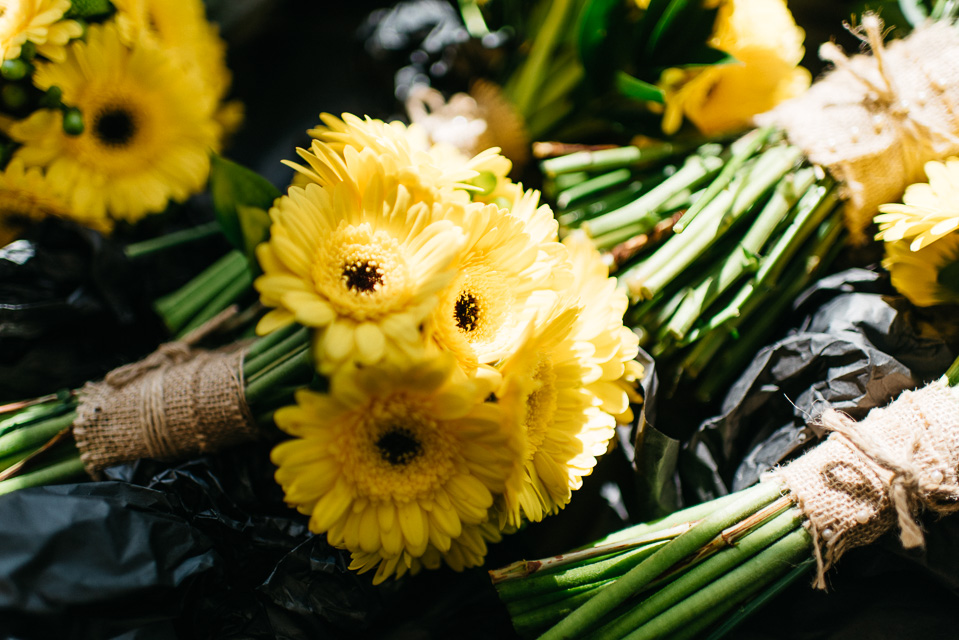 Liliana Florist by Lucy McCarthy did the flowers for the big day. “We knew roughly what we wanted but she game us some great ideas for texture and colour and they looked absolutely beautiful.”

On the menu for Emma and Alex’s Wedding Breakfast was the following: 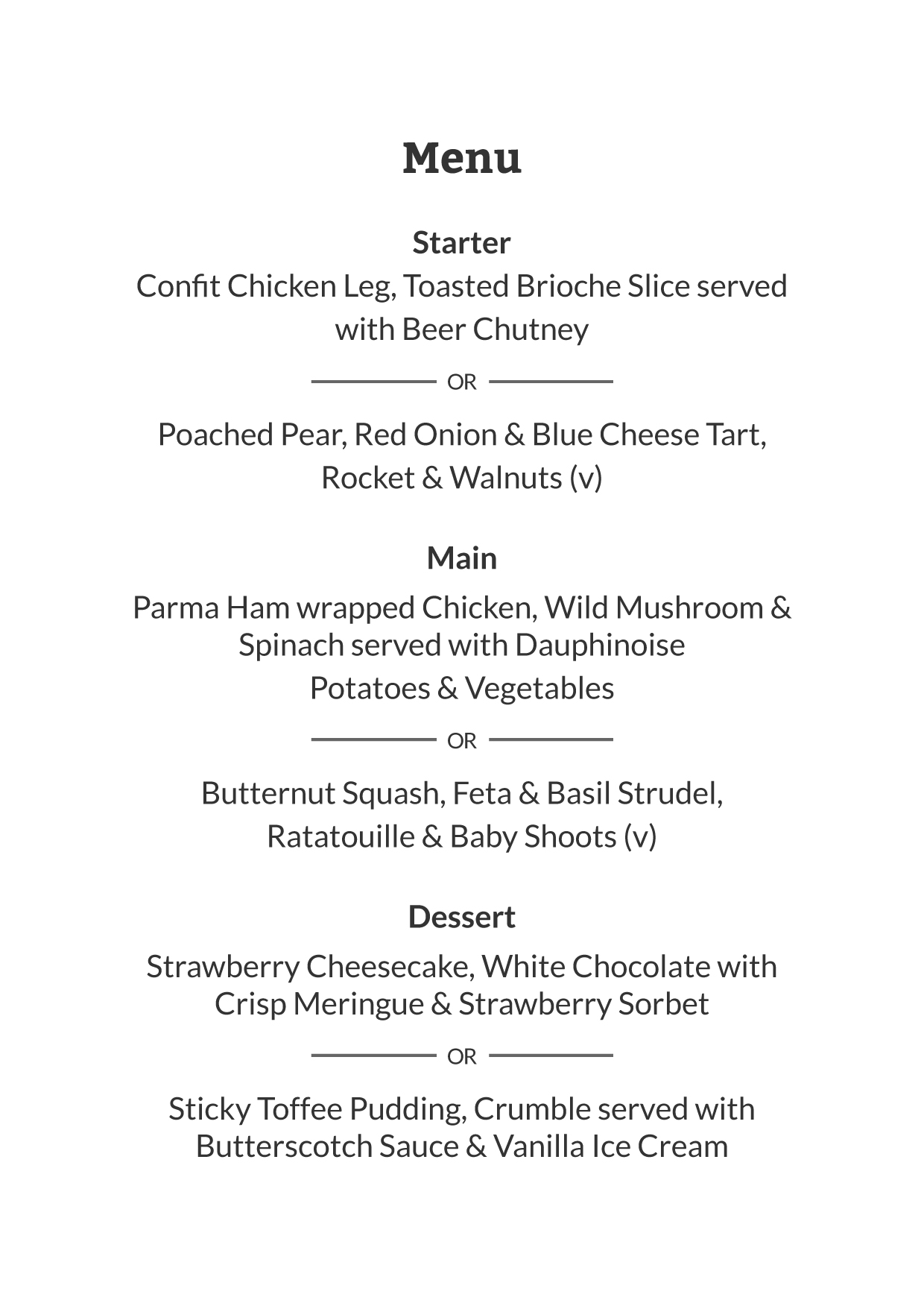 They also had cocktails prepared for cocktail hour (which seems fitting and so often not the case!) 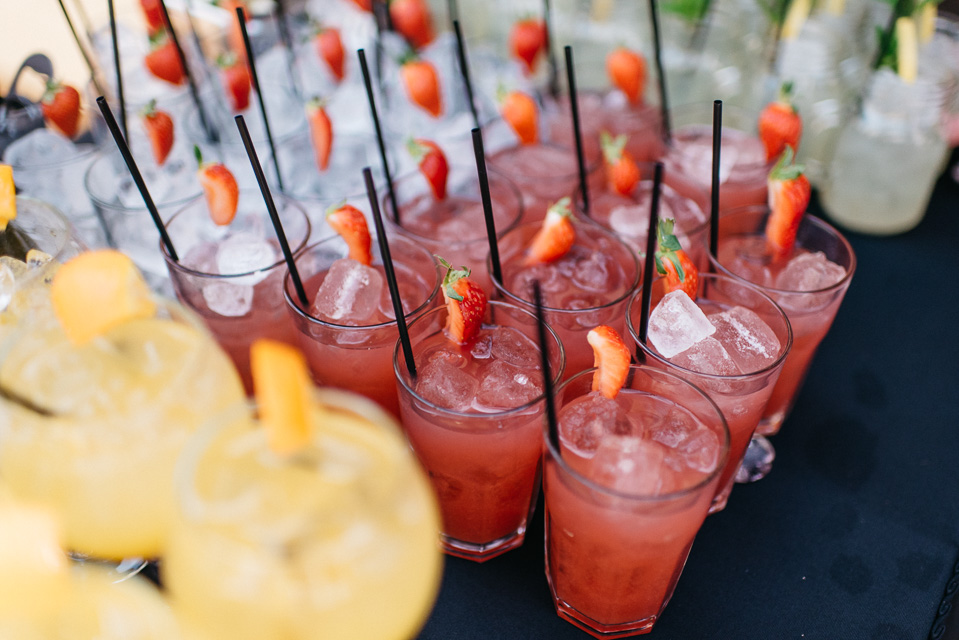 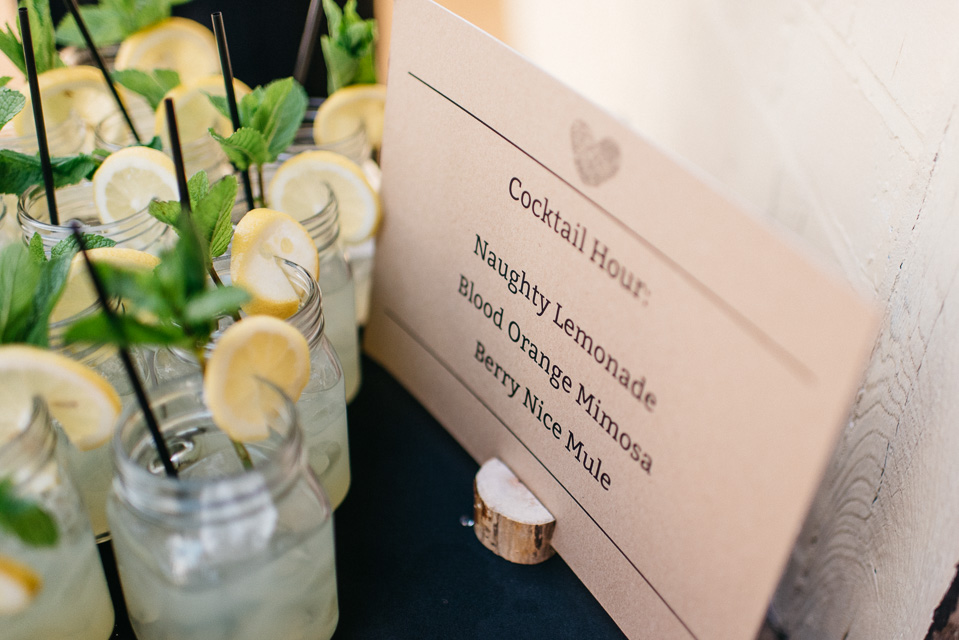 Their cake was made by Sharon Castro of Cakes For All Occasions, and was a three-tier square with lemon and lime details. 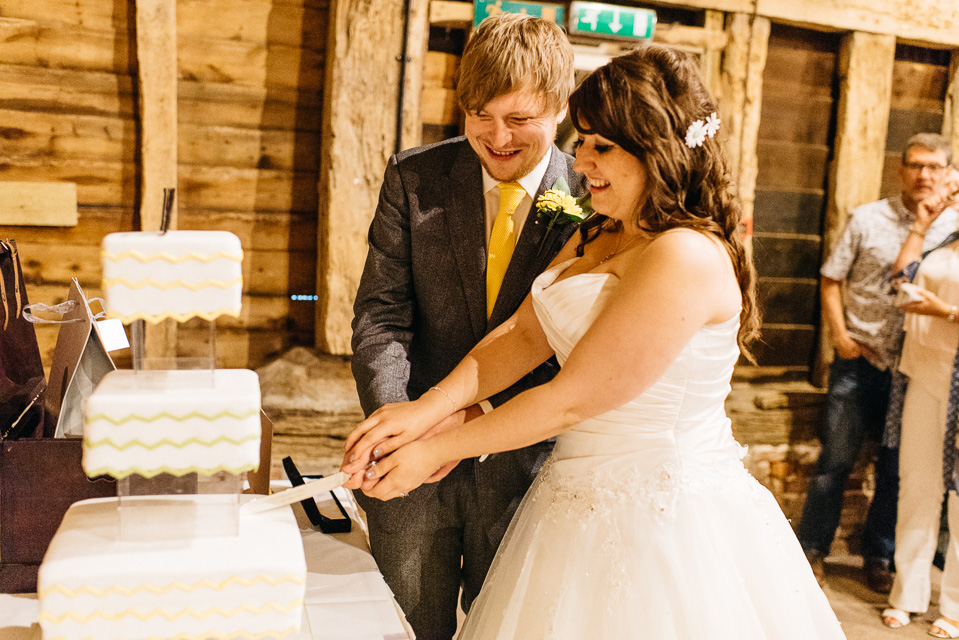 It was set up on perspex boxes between each layer, and every layer was a different flavour: Lemon sponge with lemon curd, lime sponge with lime curd and vanilla sponge with cream. 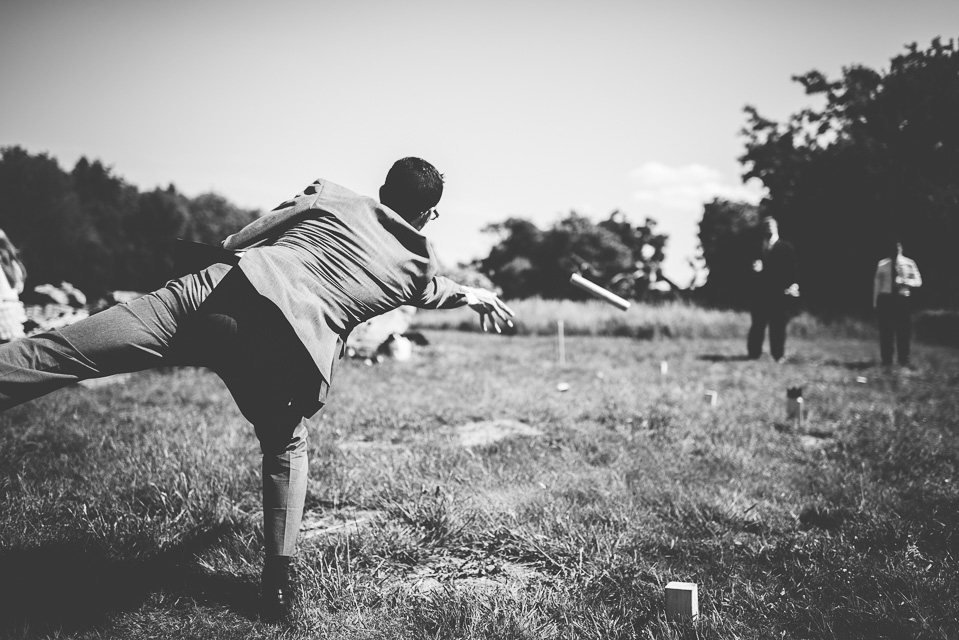 “We were provided an entertainment package by our venue which consisted of a DJ for the evening, garden games on the lawn, a popcorn and candy floss machine for the evening and a photobooth,” Emma told me when I asked her about the various entertainment elements of the day. “We embellished the photobooth by putting our own stamp on the photographs and asking guests to replace their names with photos on the venue brick wall strung up on string and pegs, meaning that everyone got to have a nose and a laugh. It really helped to get everyone involved in the fun and we got a copy of all the photos.” 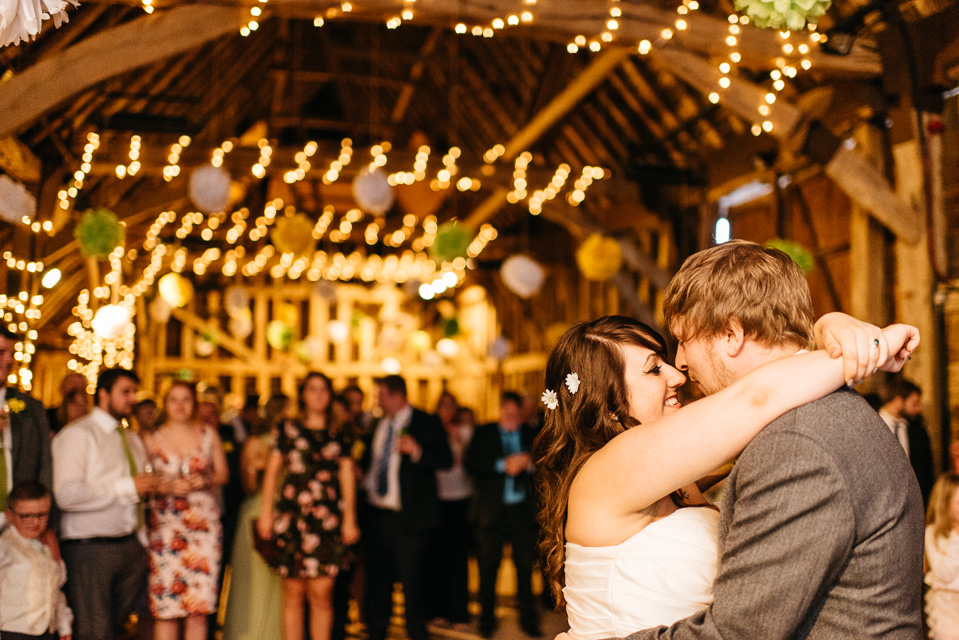 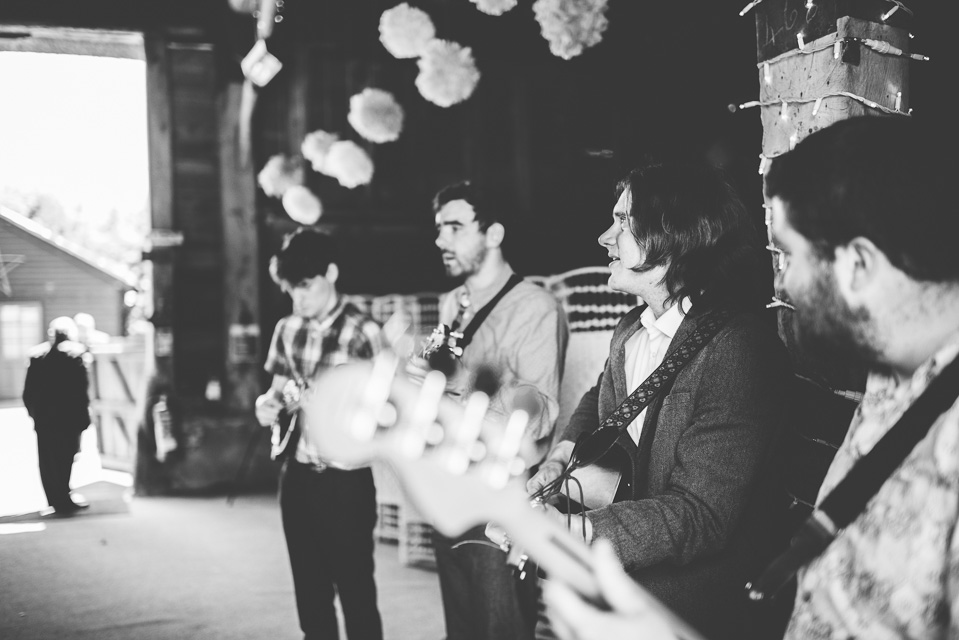 “We also had a guest book and some bad libs which were a great read afterwards. We also had a bluegrass band for the cocktail/photographs hour, between the ceremony and the sit down dinner – Alex went to school with the bassist and they were a lovely addition moving between guests and the sunshine.”

“Start putting together your ideas and then price them,” was Emma’s first piece of advice to anyone about to start planning their wedding. “After the initial shock, scale it back, get creative and make it work for you. Do what you want and don’t try to please everyone else.”

When I asked her whether there was anything she found more difficult than expected or easier than expected, she said: “We both design and project manage for a living so with some good budgeting, great suppliers and getting creative, we actually found it really easy. Everyone said to me that the table plan would be the worst, but we worked through it logically keeping groups of people together and it took ten minutes tops.”

In total, it took about a year and a half for Emma and Alex to plan their wedding. “We weren’t actually planning it all that time,” Emma explained. “Once we’d booked the venue, there wasn’t too much more we could do that far in advance so things moved pretty slowly at first. We got everyone to help, and Alex played a big part in the wedding planning. We are equal partners and I didn’t see why I had to take on all the planning and stress and he wouldn’t have wanted to. It was definitely our day.”