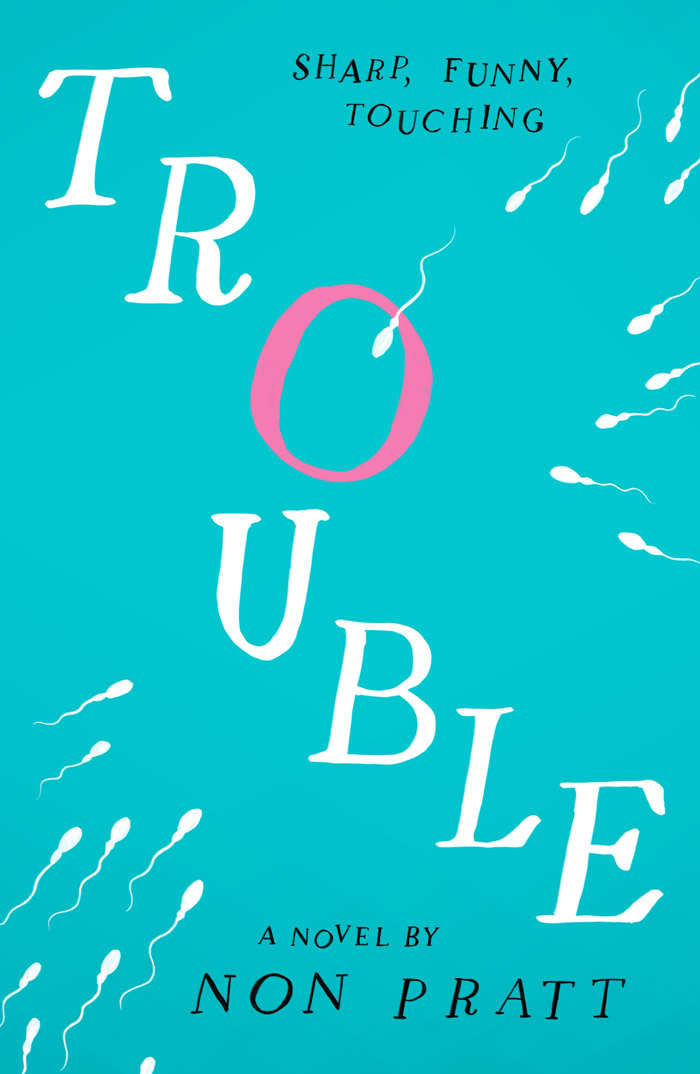 Hannah is smart and funny. She’s also fifteen and pregnant.

Aaron is the new boy at school. He doesn’t want to attract attention.

So why does Aaron offer to be pretend dad to Hannah’s unborn baby?

Growing up can be trouble but that’s how you find out what really matters.

I sped through Trouble in a matter of hours. Don’t you just love a book that flows so nicely you forget you’re even reading? It’s like watching a movie in your mind. I was fully immersed, oblivious to the world around me and entirely invested in the Hannah and Aaron’s beautiful story.

There was no sugar coating to be found, and the actual pregnancy side of things wasn’t talked about much (I’m talking symptoms, obviously the whole book revolves around Hannah’s pregnancy). That wasn’t the important bit. What were important were the relationships that were blossoming and others that were breaking down.

I’ve often found split narratives to be hit and miss, but Non Pratt achieved two distinct voices that didn’t confuse me in the slightest. They both felt absolutely true to life, like genuine teenagers with real friendships and realistic attitudes towards sex. Hannah and Aaron’s alternative points of view were addictive, and the secrets they both held close to their hearts had me hooked.

Hannah’s voice is funny, honest and bold, while Aaron’s is calmer, softer but also somehow sadder. They make a spectacularly contrasting pair, but their stories and perspectives created the perfect momentum to keep the story rolling at an engaging pace.

Another plus is the fact that it’s set in the UK. It’s always a bonus for me to read a UKYA book, because coming from the UK myself, I find them to be more relatable, with more familiar language, environments and culture than books set in America.

However much I loved Trouble, and I’m sure you will too, I can’t quite give it five stars for a couple of reasons. The first is that I found it hard to believe that Aaron’s parents would agree to let him pretend to be the father of Hannah’s baby. They put up a bit of a fight, yes, but it’s one element of the book that I found quite unrealistic, particularly given Aaron’s past.

I also found the ending to be quite abrupt and I still have so many questions that I know will never be answered, leaving me with a slight feeling of disappointment despite my overall love of the book.

But I’m super-excited to start reading Remix, Non’s second novel set to arrive in June, and it’s just been revealed that she’s got two further books on the go, one set to be released in 2016 and the other the following year.