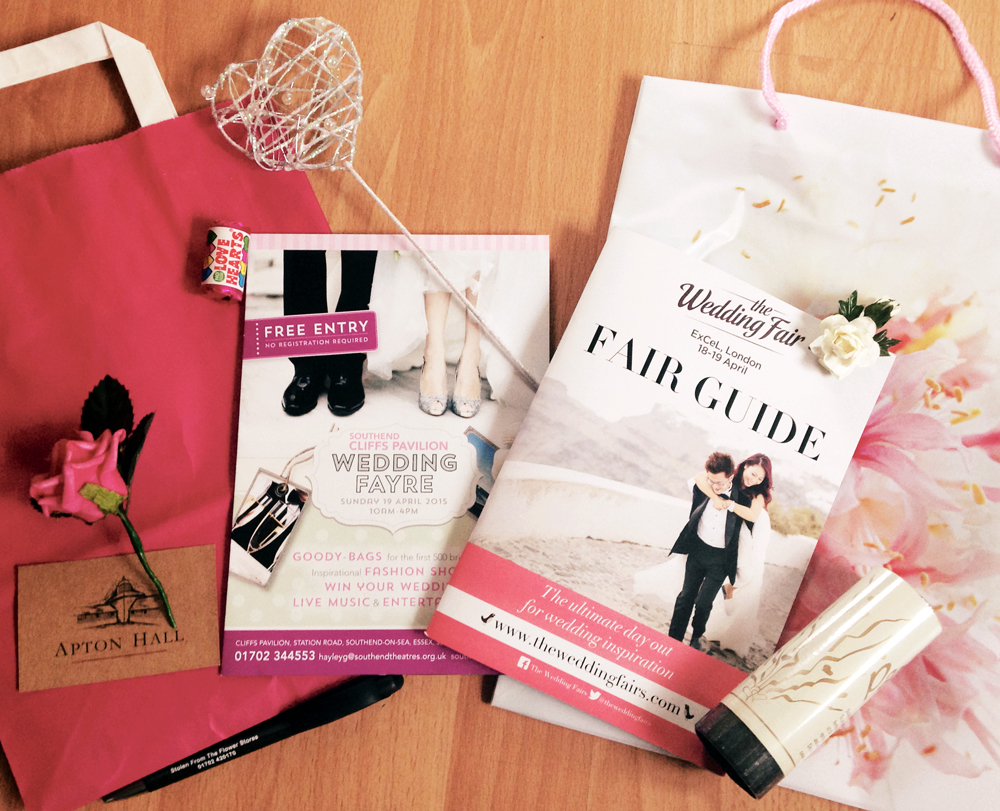 Last weekend, two weeks into my engagement and still ringless, I bravely ventured to two wedding fairs. Thankfully I had my practiced bride-to-be bestie Zara with me to help prevent me from becoming totally overwhelmed, because blimey was it a lot to take in. It was brilliant fun, though, and the buzz from having all of those loved-up, excited ladies in one room was unlike anything I’ve experienced before.

The first fair was at the ExCel in London, so was a huge, national wedding fair that attracted brides from far and wide, while the second was a much smaller, local wedding fair at The Cliff’s Pavilion in Southend, not far from where I live. They were very different experiences but both valuable in their own ways, so I thought I’d share with you the advantages and disadvantages of Local vs National wedding fairs.

Walking into the fair at ExCel, I was nervous and my eyes were darting all over the place because there was so much to see. There must have been hundreds of stands at the show, all waiting to jump on us and try and convince us that we need them at our wedding. There were cars, cakes, planners, venues, DIY and craft ideas, magazines, mobile bars, wedding apps, shoes, dresses and more. And in the middle was a huge catwalk stage ready for regular fashion shows. 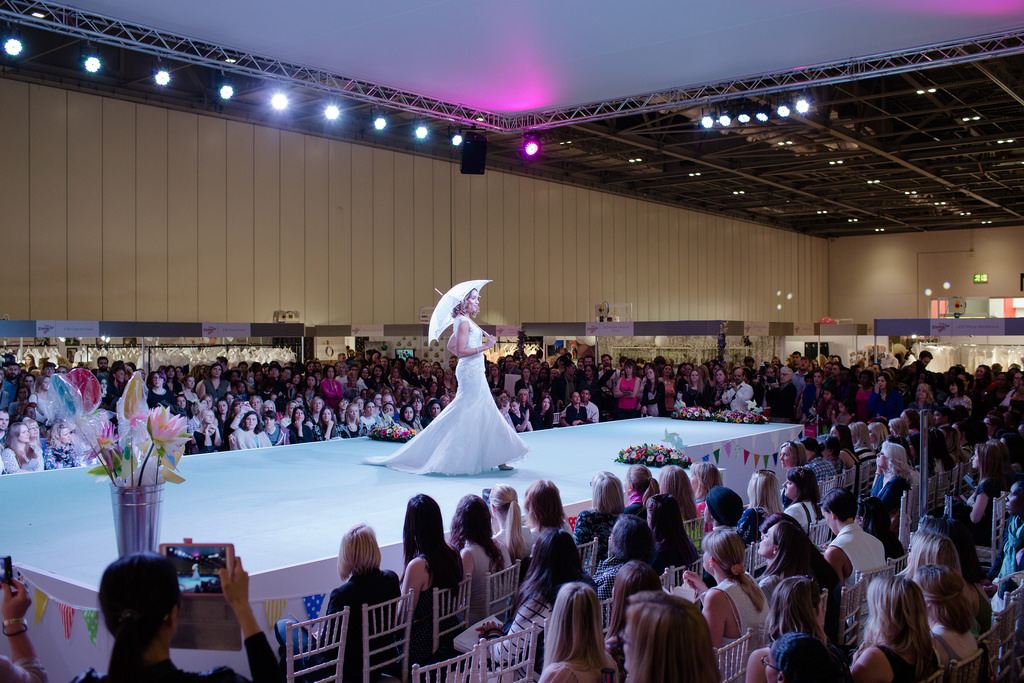 We spent lots of time simply getting inspiration from the national fair. Lots of the ideas were either way out of our budget range or too far away to be able to cater for us. But because people had come from far and wide, it gave me a better idea of what’s out there, and the possibilities available for my wedding day.

Plus, the scale of the event meant that there were literally hundreds of dresses available to see, and unlike at the local fair, you could try them on. I told myself I wouldn’t try any, because I’d like to wait until my wedding is around one year away before I seriously start looking for a wedding dress, but Zara convinced me that it’d be fun to try while we were there, and I couldn’t resist.

I had no idea what I was looking for, and the first two dresses I tried on made me feel like a complete wally, but I eventually found the kind of shape that suits me by trying on two more dresses, and now have a much better idea of what I’m going to be looking for.

At one point, while I was trying on a dress in the makeshift, curtained off changing room with lots of other bride-to-bes, the curtain opened while I was standing there in my bright pink thong. And when I say the curtain opened, I mean it was wide open for the hundreds of people crowding around to see the dresses being tried on, all of whom saw the entirety of my bum.

But strangely, I was more embarrassed coming out in the wedding dresses than I was about the bum incident (in fact, it didn’t embarrass me much at all, but it was pretty funny. It’s not like I’ll be seeing any of those people again, right?) which told me that those definitely weren’t the right dresses for me.

I’m glad I tried on the dresses, though. It was a brilliant experience, all clambering around trying to squeeze into the dresses in the tiny changing rooms, then coming out all dressed in white for the crowds to see. In the dress I liked the most, I felt pretty special coming out and standing on the little podium in front of the mirror, and it made me even excited for the big day.

I absolutely loved seeing all of the other bride-to-bes trying on their dresses too. It’s fascinating to see how different people’s tastes are. There were some dresses that I wouldn’t consider in a million years, but I thought they looked amazing on the women that decided to try them on.

I’m not going to share which dresses I tried on just yet, but I will tell you that the companies were Confetti & Lace and Oriental Pearl , so you can check out their websites by following those links. 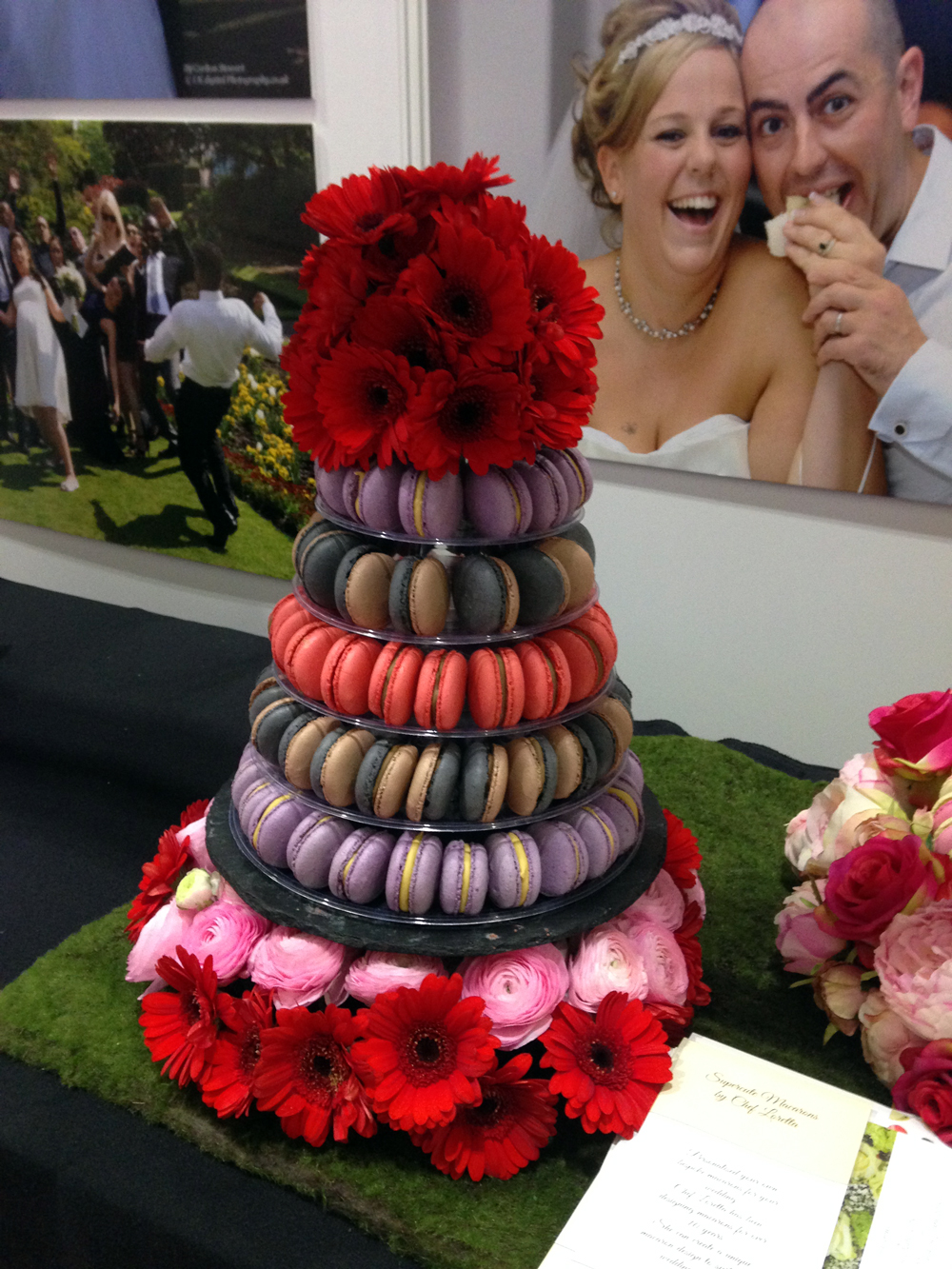 Other companies I spoke to and was inspired by include Supercute Macarons – I love the Macaron Wedding Cakes/Towers and am thinking about having one for my big day (although I’m not so keen on the flowers). We also saw the cute, crafty favours, decorations, bunting, gifts and venue styling on offer from ArtCuts, and spoke to the really nice guys at bidvine, and online service that aims to help you find photographers, caterers, wedding planners and more.

Onto the local fair now. I was feeling a bit more confident after the day at the ExCel, so I went in ready to make some contacts and get some solid ideas. All of the photographers, cake-makers, wedding dress shops and venues were located close by enough for me to seriously consider them for our wedding, so I approached them with a slightly different mindset.

We spoke with some fantastic photographers, and I absolutely adored the cakes from A Spoonful of Sugar, I thought some of the styling from The Food Fairies was beautiful, and I’m excited to pay a visit to Barleylands Wedding Village at some point soon for dress shopping and more. I also really loved the chalkboard art from The Chalkboard Co.

One of the best things about the local fair for me, though, was the venue hunting. I’ve still not booked my venue, so speaking to some of the venue representatives was helpful. I even spoke with a brand-new venue that’ll be opening in Summer 2016 about the possibility of an insanely good deal. It would be a big risk, but I’m certainly going to investigate it. (If you’re interested, it’s called Apton Hall. Here’s the Facebook page but it’s still in its very early days!)

There was no option to try on any dresses, and I imagine the same goes for most local fairs as space is more likely to be limited, but aside from that I’d say that I found the local fair more useful than the national one overall, even though we only spent around two hours there compared with the entire day at the ExCel.

I’d strongly recommend going to a national fair first like I did, more for the experience and inspiration than anything else. It was a great day out, and the atmosphere was fantastic, but it’s unlikely that any of the contacts I made will end up being part of my wedding.

Then, with more of a determined attitude, head to a local fair or two. For me, it offered up loads of companies and services that I’m considering using, plus the venues that are within my preferred distance from home, so I came away feeling a sense of achievement.

It was a pretty exhausting weekend and I now have more leaflets and brochures than I can fit in my wedding ideas box but it was fun, useful and a great way to kickstart my wedding planning.

Did you go to The Wedding Fair at the ExCel or the Cliffs Pavilion Wedding Fayre? I’d love to hear from you. Which companies did you speak with? Which companies were your favourites? Did you try on any dresses?