World After – the follow-up to Angelfall and the second in the Penryn and the End of Days series – is out now! On the day of its release, I headed down to Waterstones Piccadilly for an event hosted by the Post-Apocalyptic Book Club, who were chatting with the author of the series Susan Ee. 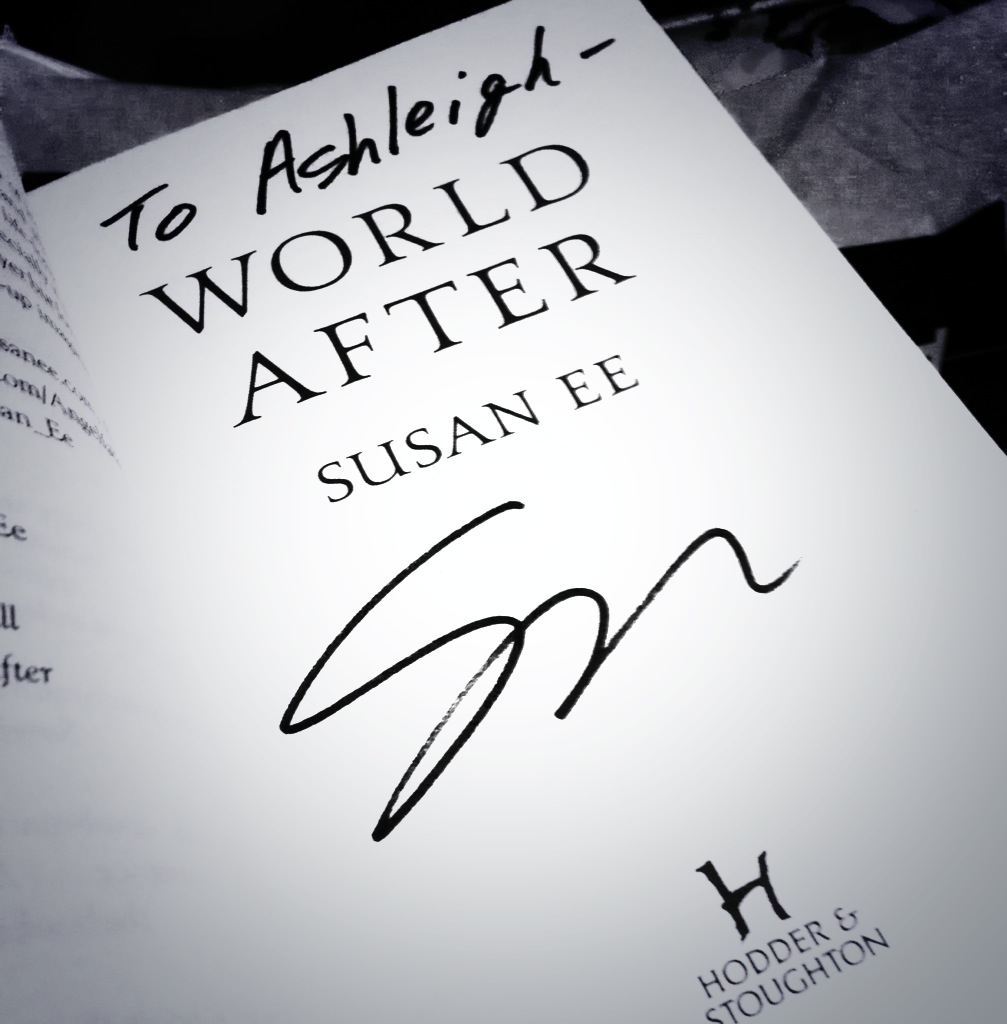 I loved Angelfall (as you can tell from my review), so I can’t wait to read World After, which actually starts about an hour after the events that ended Angelfall so dramatically.

Here are some of the highlights from Susan Ee’s talk, including movie talk, writing advice and the inspiration behind Angelfall.

“I’ve always found it interesting that we think of angels as being cuddly and sweet. They look out for us as guardian angels and we think of them as cherubs.

“In the oldest stories in the Bible and in various religions, they’re very intimidating warriors. In Revelations in the Bible – which is all about the traditional apocalypse – there are angels all around that are involved in the end of the world. And somehow we’ve managed to take it from there over to “Oh look, they’re going to help me, they’re going to give me a wish.”

The inspiration for Penryn

“I had her name before I actually had the story. In Angelfall she mentioned how she’s named after a sign on the freeway, and that’s actually true.

“In terms of who she is, there’s no one in particular. I imagine her to be that girl that sits in the back row of the classroom. Or maybe she sits in the middle where she’s hiding out in plain sight. Everybody likes her but no one knows her very well.

“I write in multi-dimensions. Everybody writes differently: some people say I’m going to write this character and this is what she’s going to be like. With Penryn, she just came alive on paper fully-formed.

“I think that the family itself is very much a part of who Penryn is. She had her own personality, but having grown up in that environment [her family life is troubled, to say the least], it sort of prepped her for what happens if the world falls apart and your outside life is now very much like your home life in some ways, and that’s what happened with her.

Were you surprised by the readers’ love for Penryn’s mother?

“It was a big surprise for me. She’s really weird and she’s really disturbing. It surprises me that so many people like her and are attracted to her and want to follow her and think she’s very special. I love that, because she’s not your average person and she certainly doesn’t go out of her way to be kind and sweet and classically nice to everybody, but I love that the readers are perceptive enough to tell there’s someone specially buried in her, and someone interesting. Maybe you don’t like her, and you don’t want to have coffee with her, but you’re interested enough to follow her, and that really surprised me. I feel really good about it.

“When I first started out I actually thought Angelfall was going to be a paranormal romance, and that was going to be the story. Some people might argue that it is emotionally. But every time I got them really close together, there would be something like cannibalism that popped up. The world just happens to get in the way as life goes on.

There are dark elements and mature themes in the book: were you concerned about the readership?

“I wasn’t concerned at all because I didn’t know what age range I was writing for. In then end I decided the readers will decide – it’s not really up to me. When I published it that was exactly the case. Whoever was interested came to the book.

“With the second book I became more aware of who the readers were and I knew there were younger readers. And for a while there was a controversy among the readers: is this YA, is this adult?

“I did think about it but it was definitely this question of how honest do I need to be? The honest and organic won. Now I’m much more aware of the age range and I get more and more feedback from both the publishers and from the readers but I want to become less aware. It’s incredibly difficult to feel like a thousand people are looking over your shoulder as you type every word.”

“I try really hard to have a ritual but nothing has ever stuck. What they say is write first thing in the morning. I’ve tried, and sometimes it works but other times it doesn’t. If I have a ritual at all it’s that I keep swapping things. It’ll work for a while and when it stops working but I swap it out. I like having different options because if I run into a wall I swap it out and the novelty of it gets me going again.

“I found the second book much harder, because I had a lot more noise in my head. With Angelfall it was just me, and when you’re an aspiring writer you have your own internal struggles: will it ever go out will anybody like it?

“But once you have a piece of work that has been recognised in some way, suddenly everything is different. Now we have all these voices in your head. And I think I want to please everybody. Every writer is writing for somebody and you want that somebody to be happy.”

Why did you decide you wanted to write?

“I used to read a lot, and over time I realised I was looking for a particular kind of story. But reading is so much easier than writing, that I just kept wanting to read but eventually it got to a point that I realised maybe I should write the story that I want to read.”

“I wrote Angelfall, and once I was done with it I prepared it to go out to a whole load of agents and publishers. But at the last minute, before I sent it to anybody, I thought why don’t I just publish it myself.

“I was ready to get it out to the world. The traditional route takes much longer: with self publishing you just press that button and it’s published.

“The other reason I wanted to publish it on my own is that I have a Silicon Valley attitude, and that mentality is that if there is a disruptive technology, we want a piece of it. That was right about the time that people were starting to catch on to self publishing. I thought, yeah, I’m interested in publishing this just as an ebook. I didn’t really care about the print book at the time. I initially thought that it would never be a print book.

“So I published it on my own and was very surprised at the reception that I got and the deep connection that I felt when the reviews started coming in.

“When I published it, I think with a lot of aspiring authors don’t really think about what happens after it’s published. I was sort of unaware of this connection that can happen between the writer and the readers. When the reviews started coming in, that was positive that I’d touched somebody. It was a special moment to know that someone out there actually read it.

“I initially assumed that they’d be exactly like me, you know? We would like all the same things and if we knew each other in person we’d be the best of friends. Then I started clicking on their profiles and it turns out that they’re their own person from all walks of life. And it really touched me to know that somebody who would never stop on the street to talk to me somehow really connected in a way that was totally unexpected to both of us.

“Actually, World After is dedicated to the early readers of Angelfall for that reason, because of that very special connection. “

“Try free writing. Free writing is where you just put pen to paper and just write. Keep it tight, say for five minutes or ten minutes, and write as much as you can during that time: you just cram it in. No plotting, not much forethought at all. Just let yourself go.

“I just like to just sprint, but I know some people like to do it with music. You can look at a certain image and make all kinds of interpretations of what it can mean. You can get a lot of surprises that way. Your mind is an amazing thing, and it gets bored if it doesn’t have anything to do. So if you give it a task like this you’ll be shocked at what comes out.

“Another important thing is, you can’t have any expectations when you do that. Your subconscious mind is not your servant, you just let it play. When it plays, that’s when the beautiful stuff comes out.”

“I’m trying to keep my expectations low at this point. I used to make short films, so I know that it goes through a very torturous project. I have hoped that it’ll actually be better than the book, because it’s a different media. On a very positive day I think it’ll be much better than the book.”

10 YA books that all grown-ups should read