So this week has been a pretty busy one for me, not least because of a particularly exciting book signing event that I went to with Ryan (my other half) on Wednesday. “Who was signing books?” I hear you ask. Well, it was none other than Veronica Roth, the author of one of my favourite YA dystopian trilogies: Divergent. She was signing her new book Allegiant (the final in the Divergent series) at the Prince Charles Theatre in Leicester Square. 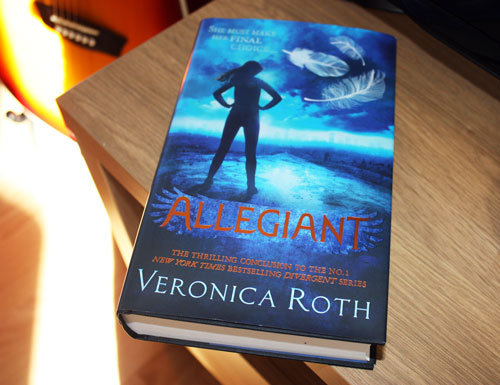 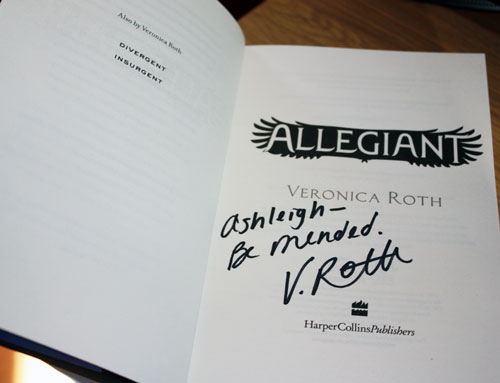 If you’ve never heard of Divergent, let me fill you in a little. It’s set in a future in which society is divided into categories – called Factions – that each require members to abide by different rules depending on their beliefs. For example, those in Abnegation believe in selflessness, and must never think of themselves. They’re not allowed to look in the mirror, they can only wear grey clothes and they’re never wasteful. Dauntless, on the other hand, believe in bravery, so are always pushing themselves to the limits to eradicate fears.

It’s a brilliant concept, one that captivated me completely. I’ve just finished re-reading Divergent, then (when Ryan’s finished) I’ll be re-reading Insurgent before delving into the final instalment in the series: Allegiant. It’s been tricky trying to avoid spoilers for the last book, but I’ve managed so far!

I find Veronica Roth really inspiring, particularly because she’s only 25, and has already got a bestselling trilogy under her belt (she has an amazing blog, too, with some massively useful writing tips).

It was her first time in London this week, which I thought was quite surprising, but she said that she was loving the city – even the weather. During her talk she discussed the characters, their personalities, their relationships, things she would do differently if she wrote the books again and her thoughts about the movie, which is coming early next year.

Talking of the movie, Shailene Woodley – who’s playing Tris, the main character – made a surprise appearance at the event on Wednesday, which was pretty exciting! They showed the trailer on the big screen and it was really good, so my hopes for the film are high. You can watch the trailer below (but don’t forget to keep scrolling to find out what Veronica Roth said during her talk!):

Here’s what Veronica Roth had to say during the Q&A.

When did you first come up with Tris? Did you know what her personality was straight away?

“It was kind of a weird process. I tried to write Divergent four years before I actually finished the draft from Tobias’s perspective, but it was kinda boring for me, because I kind of felt like you expect a young man growing up in an oppressive environment to make bold decisions and be brave. That’s what we expect.

“But with a young woman – especially one who’s very small – I felt like it’s a little more surprising. But I didn’t really know what kind of girl would be the narrator until I thought of a voice. So I wanted to tell the story from a very clipped, straight forward, little bit repetative voice, and a strong one too. It was only when I figured out that voice, that I actually figured out Tris’s personality.”

How do you feel about the movie adaptation of Divergent?

“I haven’t seen the whole thing, because no one has yet. But I was on set quite a lot because the film was shot in Chicago, which is where I live, so on any given day that was like 20 minutes away from my house, which was very strange – you know, to walk around in places that I’d walked around before as a normal civilian and then to see them all gravelly and intentionally distressed. It was very weird.

“But from what I’ve seen so far – I mean every actor that they cast has such a really amazing way of rendering the character, even if they don’t look exactly like what I had imagined or described. And the level of detail that everybody made happen in order to get their job done. I mean, the guys who were making the floor in the Abnegation house were very serious about making it look like it was made of found scrap wood because the the Abnegation would never waste.”

How did you come up with the idea for Divergent?

“A little piece of the idea came from a psychology class. We were learning about exposure therapy – a method of treating people with anxiety and phobias in which they’re repeatedly exposed to the thing they’re afraid of. That’s where the creepy simulated fear landscapes came from, and the idea of the Dauntless.

“As far as the system around the Dauntless – that was a little trickier. It was kind of what I wanted to happen, kind of. I mean, there’s something really appealing about a society in which everybody’s got a category but you get to pick which one you’re in so it’s not like you’re being forced. And everyone has to take personal responsibility for their behaviour, and that seems like a good thing to me. I kind of made it my utopia and watched it become a dystopia. Which was weird.”

Which faction would you be in if you were in that world?

“Well, I used to say Dauntless, but then I’ve since come to terms with how I would just die. But I think I would probably choose Abnegation, but I’m not sure how long I would last. I think what would probably happen is I’d become factionless.”

The Dauntless have lots of tattoos. If you were in Dauntless, what tattoo would you get?

“I think one of the things I like most about them is that they’re tattooing things they’ve overcome. It’s kind of something they do to make them feel stronger. You put it on your body to remind you that you tackled it.

“Maybe I’d get the birds. The reason there are birds in these books, like, swarms of them, is because I hate birds. When I was living in Romania, there was this giant sea of birds that would float over and make a lot of noise, and it was just horrifying.”

“Since watching the movie there are things about the first book especially. So Kate Winslett’s Jeanine – it’s better than mine. In the first one [Divergent] she’s a little bit arch, like a Disney villain, like “ah ha ha”. And I kind of wish I brought a little more nuance into that character in that book. I kind of wish I had showed a vulnerability to Jeanine in the first book.”

“The rest of the series I feel pretty good about.”

Which character did you relate to most?

“It kinda depends on the day. All of the characters have a little bit of me in them, just because I feel like I’m the only person I know well enough to put into fiction.

“On a bad day I feel like I relate a lot to Jeanine and her fear of the unknown and her desire to control everything around her. But, on a good day, I feel like Tobais. He’s a quieter and more thoughtful person so on a good day I’m a little like that.

“I try to be funny like Uriah but it doesn’t really work [the audience laughed] But you laughed!”

Did anyone inspire you when you wrote Tris and Tobias?

“Is that your way of asking me if my husband is Tobais?

“I think there’s a place for a complicated and unhealthy relationship in YA fiction. I think that’s alright sometimes, depending on how it’s handled. But for me, it was important that the relationship between Tris and Tobias be a point of strength for both of them. They have so many weaknesses and so many flaws, but their relationship is a sturdy foundation. The real inspiration for them and their dynamic is just respect.

“Even when they have conflict I try to make it not condescending. Although that sort of falls apart a bit in book two but then she calls him out on it in book three which I’m really happy about. Go Tris.”