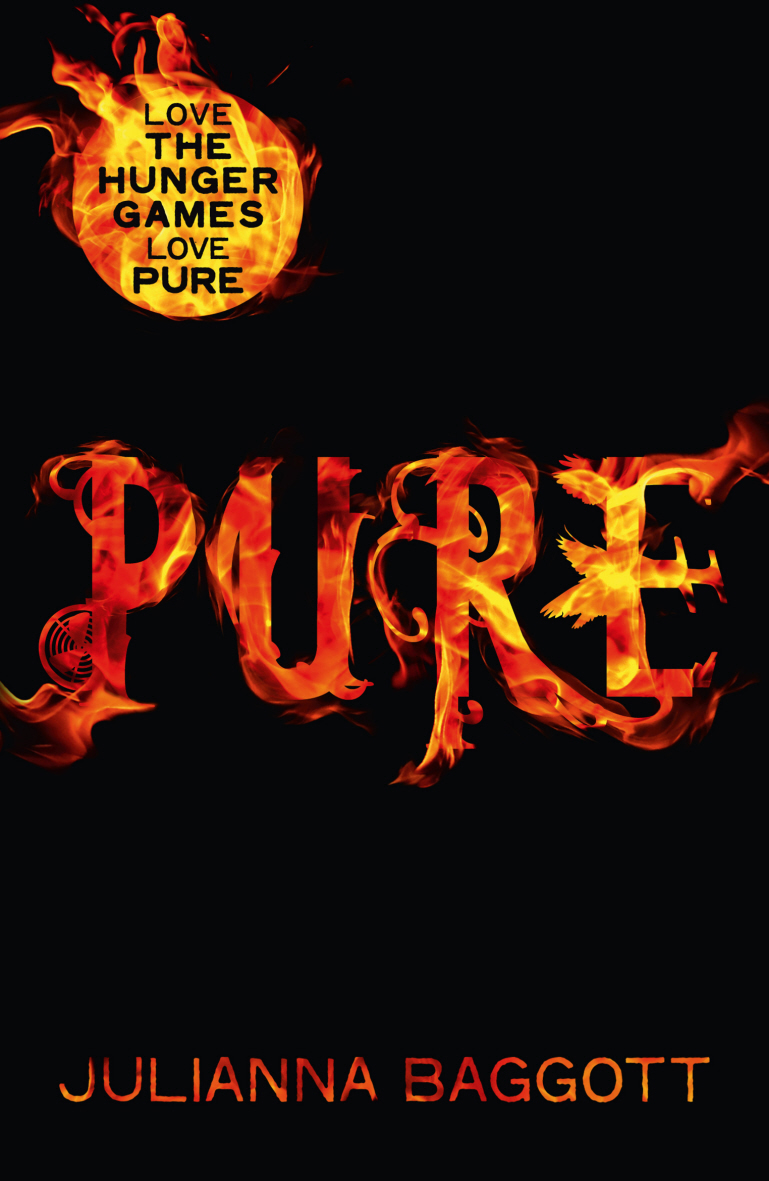 I’ll be honest, I picked up Pure in the bookshop based mostly on the fact that the sticker on the front says ‘Love The Hunger Games Love Pure’. Then I read the blurb and thought it sounded right up my street – dystopian, post-apocalyptic, YA. So I bought it and read it, of course. Here are my thoughts on Pure by Julianna Baggott.

The deathly houses all fell down. The sick souls wander ’round and ’round.

Pressia barely remembers the Detonations. But, living amongst the devastation, every day a dangerous struggle for the survivors who are marked by their fused, burnt, damaged bodies, she is starkly aware of what has been lost.

Burn a pure and breathe the ash…

Partridge is one of the lucky few sheltered inside the Dome. They escaped the apocalypse unmarked, pure. But he doesn’t feel safe. Smothered by the rigid order of the Dome’s regime, he suspects all is not as it seems.

When Pressia meets Partridge, their worlds shatter all over again.

First things first, I should warn those of you thinking about reading this book: Pure is horrible. By that, I mean it’s grotesque, creepy, disturbing, and absolutely frightening. When they said that the survivors of the Detonations were marked by their fused, burnt, damaged bodies, they really weren’t joking. First up, Pressia’s arm has been fused with a doll, so its eyes, mouth and plastic features are now a part of her body. Pressia’s grandfather has a fan fused into his neck, and another integral character, Bradwell, has several birds fluttering away in his back. At first, I found it quite uncomfortable to read about these parts of people, but by the end I came to realise that they can be quite beautiful in a way.

Other survivors have fused together with their siblings, friends, children, now together as one for the rest of their lives. Even more extreme are the Dusts, people who’ve become one with the earth. These have lost most of their humanity, and are a big threat to other survivors.

Once you’re accustomed to reading about this world that is so different from the one we live in now, it’s time to delve into the storyline. The narrative is split between various characters, though in third person. It reminded me of Michael Grant’s Gone series. We follow Pressia as she tries to escape from the OSR, a ‘Pure’ named Partridge as he tries to escape the Dome, inside which people were completely protected from the Detonations, Lyda, who is also a Pure, and El Captain, who was fused to his brother Helmud when the Detonations hit.

Sometimes, I find split narratives confusing and overly complex, especially when there are more than two characters involved. However, Julianna Baggott did really well with it, enabling a bigger picture to be painted for the reader.

I do have a few gripes with Pure though. It’s just so obvious sometimes. For example, there’s a ‘fairytale’ that plays quite an important part in the story from the beginning, but the secrets behind it are handed to you on a plate. I really wondered why the characters hadn’t figured it out before. They don’t get to the bottom of it until after the half way point in the book.

There’s no doubt that there’s action from beginning to end in Pure, but some of it isn’t that gripping. I wasn’t completely hooked, and it took me quite a long time to get through some of the slow points.

There are also quite a few holes in the storyline – many questions that never got answered, and I don’t think ever will.

Also, I’m not sure that all lovers of The Hunger Games will love Pure. It’s got a lot more horror elements in it than the Hunger Games, and a much darker feel to it overall. I think it’s more of a book for lovers of The Maze Runner and the aforementioned Gone series. Plus, it really isn’t for the faint hearted.

I’m sure that I will read the next book in the series, Fuse, but I won’t be rushing out to read it tomorrow.

What did you think of Pure? I’d love to know your thoughts.