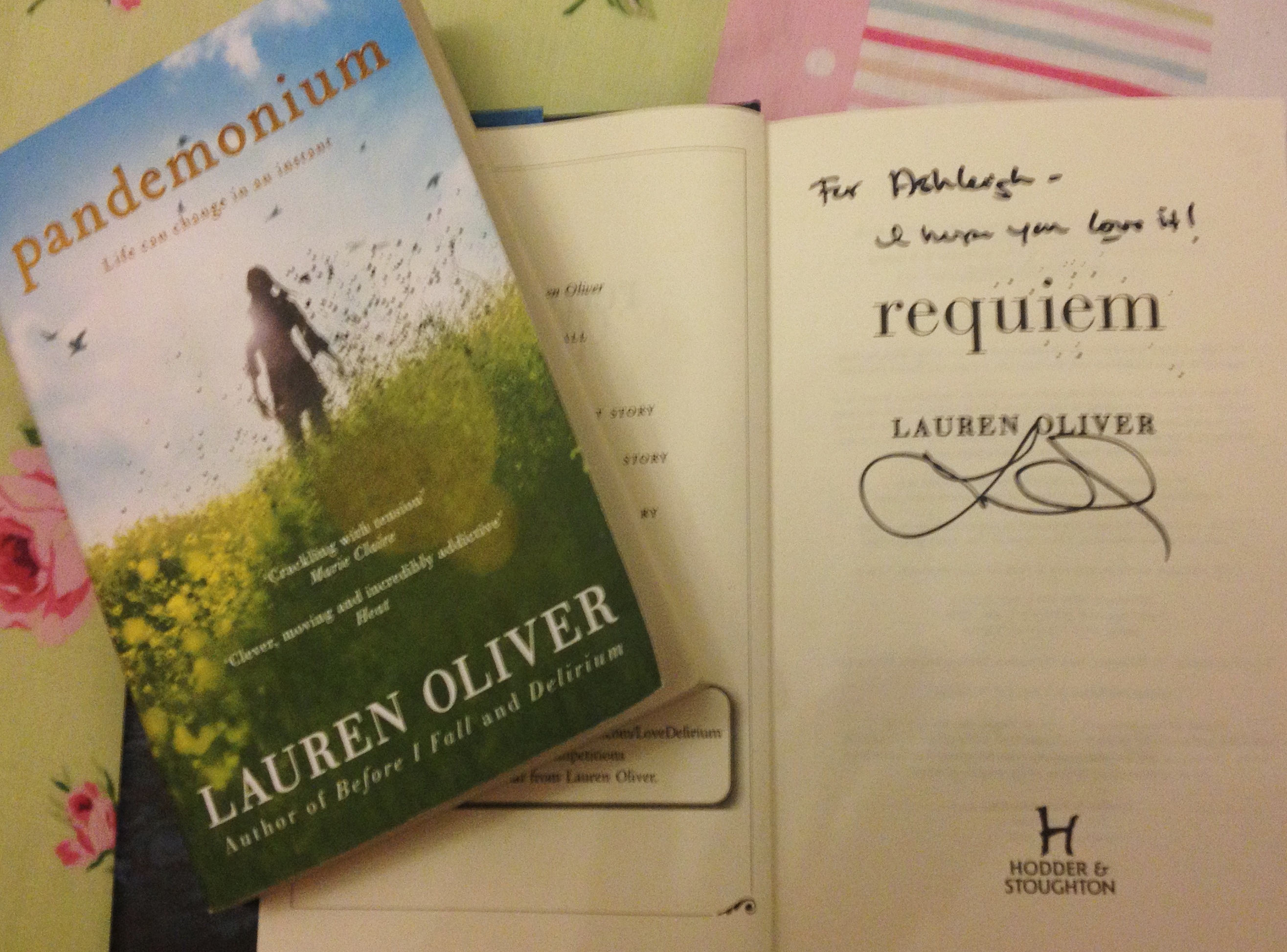 On Tuesday, I got to meet Lauren Oliver, one of my new favourite authors. And, let me tell you, it was awesome! She’s a brilliant public speaker and really funny too.

For those of you who don’t know Lauren, she’s the author of the stunning YA novel Before I Fall, as well as the dystopian treasure that is the Delirium series. Tuesday marked the UK release of the final novel in the Delirium trilogy: Requiem. I haven’t read it yet, but I’m aching to get stuck into it, especially after the whopping great cliff hanger Lauren left us with at the end of Pandemonium.

So, to celebrate the launch of Requiem, Lauren hosted a talk and book signing at Waterstone’s Piccadilly, and I jumped at the chance to go. An impressive crowd of other teen/twenty-something girls were also there, and a few men too, including my boyfriend Ryan who I persuaded to join me (thanks Ryan!).

Lauren explained that she grew up with a house full of books, as her mum and dad are both writers themselves. She’s been writing every day since she was nine years old, persuaded by her parents, who gave her writing assignments and embraced her creativity in order to encourage her to explore her imagination.

To start with, Lauren wrote mainly fan fiction of her favourite novels, such as sequels to stories she wished hadn’t ended and short stories involving the characters she had fallen in love with. It took her eight years to finish her first book, which she started writing while in school. Despite managing to score a literary agent, the book was rejected by all of the publishing houses. They all said the same thing: the story was beautifully written, but it had no plot.

Her second novel was rejected for the same reasons, and Lauren began to get disheartened. She considered becoming a Literature professor, as her parents and sister were all professors too, but she decided to take up a creative writing course instead, which taught her how to plot and tell a story.

At the same time as taking up the course, Lauren began working in the young adult division of Penguin Books, where she was exposed to YA fiction for the first time. She said that she found the stories interesting and weird, and pushing the boundaries in a way that you don’t see very often in adult books. That’s when she started working on Before I Fall, her debut novel.

If you haven’t already read Before I Fall (you should), it tells the story of a teenage girl called Sam who, without meaning to spoil anything here guys, dies within the first few pages of the book. The subsequent pages describe Sam’s transformation as she relives her final day again and again, and comes to realise that she was pretty damn mean.

Lauren said that, when considering what to write as her next novel, she thought about her favourite quote from Gabriel Garcia Marquez, who said: “All good books are about love or death.”

She’d already written a novel that is very much about death, so Lauren decided to go for a novel about love this time. And she wasn’t kidding.

Delirium revolves around the idea that love is a contagious disease. It’s set in a future where scientists have developed a cure for love, or Amor Deliria Nervosa, as it’s more formally known in the books (and was almost the name of book one in the trilogy until someone convinced Lauren to come up with something a little more catchy).

It’s a genius concept. After all, the symptoms of love and heart break are not far off symptoms we’d usually put down to an illness. In fact, Lauren pointed out that scientists are actually working on a pill that heart broken people can take to numb their emotions. “Not really science fiction, people, it’s just forward thinking,” she said.

Lauren explained that she likes to vary her writing, keeping it different each time. This can be difficult with a trilogy, but you’ll notice that the structure of Pandemonium, the second book in the series, is different to Delirium, with chapters alternating between ‘then’ and ‘now’ time-frames.

In Requiem, Lauren has again spiced things up, this time by making the bold move of introducing a whole new narrative: Hana’s perspective. So, this time, the narrative switches between main character Lena and Hana, the best friend we grew to love in Delirium and missed dearly in Pandemonium. Like I said, I haven’t read Requiem yet, but when I found out that this was how Lauren had approached the final instalment of the Delirium series, I was seriously excited. What a bloody brilliant idea.

After chatting about her background and the thinking behind her novels, Lauren opened up the discussion to questions from the audience.

Among the more interesting was the question: “Did you always plan to make Delirium a trilogy?” to which Lauren replied that she had always felt that there were three independent movements in the story that acted as natural breaking points.

She also said that she felt that Lena’s story was complete, but that there is still so much to explore, which brought up the subject of the TV series.

Yes, Delirium is being turned into a TV series and I’m really excited about it, as is Lauren. Some Delirium fans are not so keen on the idea, however, and that was pretty clear during Tuesday’s event. Lauren did well with putting these fans’ minds at rest though, explaining that she’s confident that the show’s creators will preserve the story.

She quite rightly said that the first novel couldn’t be adapted straight from the book onto our television screens, because, if it was, it would be mostly about Lena running around thinking things. “That doesn’t make for good TV,” she joked. I heard that they’re considering making the first book just one episode long, and then the rest of the series will go from there. Personally, I think that’s a great idea.

Another aspect of the TV show that some fans are getting worked up about is the fact that they’ve cast an actor with brown hair to play Hana, who has blonde hair and blue eyes in the book. Lauren explained that the important thing about Hana is not her hair and her eyes, it’s about her being the kind of girl who, if you were placed next to her and a stranger was to make a choice between you and her, they’d choose her.

As for the future, Lauren revealed that she’s got a stand-alone novel called Panic in the works. Panic is the story of a boy and girl who live in a small, poor town. Every year, the teenagers in the town play a dangerous game. Lauren said that Panic is more realistic and gritty than her previous works.

There won’t be an epilogue to the Delirium series at any point in the future, because Lauren doesn’t believe in closing the door on a story like that. She wants to give the readers a chance to imagine their own adventures beyond Requiem for the characters in Lena’s world, she said.

Overall, it takes Lauren about eight months to write a book, and then an additional one or two months to edit it. She does normally work on two novels simultaneously, though, so she’s manages to complete about two books per year.

Her inspiration comes from observation, and she likes her characters to have a complexity that seems out of line, because that’s what real people are like. For example, real people often say and do things that they don’t really mean. Take Hana, for instance, who likes to play at rebellion but doesn’t actually take the risk. 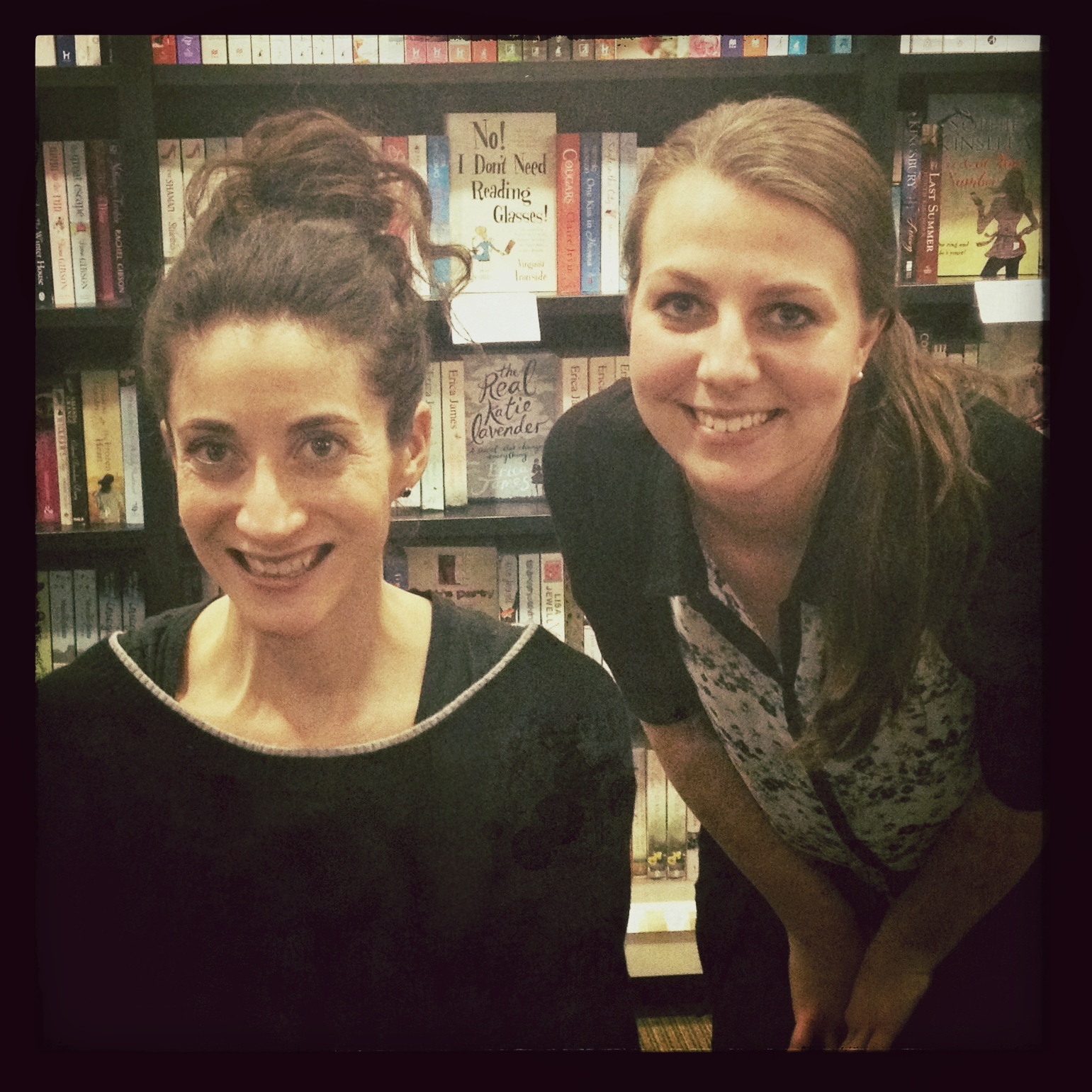 Above: Me and Lauren at the book signing

My current inspiration has come from her. It was a really motivating evening and it also helped me come to the realisation that writing and storytelling takes a hell of a lot of practice. I’ve already done my daily dose of creative writing today, and I’m planning on trying my best to write at least a page a day from here on out. Maybe one day, I’ll actually finish writing a book. But don’t hold your breath.

If you’re still undecided about whether to read one of Lauren Oliver’s books, you can check out my review of Before I Fall and of Delirium. Plus, expect to see a review of Pandemonium within the next day or two.

If you have read something by Lauren Oliver, what did you think? Let me know in the comments section below, or on Twitter.