One of the best books I’ve read in a long time. A must-read.

Kaz is still reeling from being dumped by the love of her life… Ruby is bored of hearing about it. Time to change the record.

You guys have got to get out there and grab yourself a copy of Remix. It’s coming out on 4 June and I wouldn’t hesitate to recommend it.

I knew that I’d enjoy this one. I found Non Pratt’s debut, Trouble, so refreshingly honest that I couldn’t wait to pick up Remix. Like Trouble, Remix has a split narrative, but this time it’s between two female best friends, Kaz and Ruby. Kaz is the more quiet of the two, while Ruby is mouthy and bold. It’s quite a cliché friendship in that way, but that’s as far as the clichés go in this book.

I fell in love with both of these characters equally, which is rare because I always tend to develop a favourite when there are two protagonists. They both have flaws and they make plenty of mistakes over the three days that this book spans, but you’ll forgive them because they’re exactly the kinds of mistakes real teenagers make.

I read a lot of YA books, and while I enjoy most of them, not many feel like they’ve been captured directly from real life. Remix does, and that’s what makes it so special.

I had absolutely no idea where the story was going to go. There are twists and turns on what feels like every page. As I said in my review of Lobsters, which by the way you’ll really like if you liked Remix (and vice versa), I’ve discovered a new love for books with festivals in them. Ok, so I’ve only read two and I’ve just mentioned both of them, but I want to read more! It’s such a cool scene to read about, with music, dancing, drinking, lots of new people to meet and lots of familiar faces, too. There’s also lots of fangirling over hot musicians, which is brilliant fun.

Kaz and Ruby’s relationship is so heart-warming. It’s pushed to the absolute limits in this novel and it’s actually their friendship rather than the relationships they have with various boys that you’ll find yourself really routing for, another thing that’s refreshing about this book.

I’m starting to think that Non Pratt is actually magic. She probably graduated from Hogwarts last year. I am so excited about what else Non Pratt has got up her sleeve because her voice is so perfectly authentic and I cannot wait to read more. 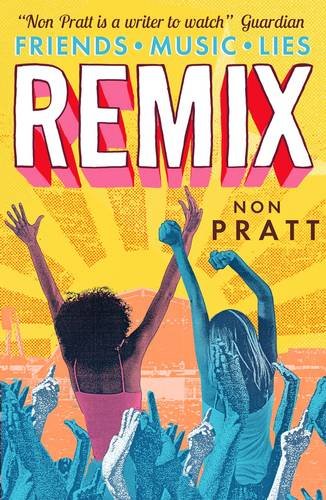 Also featured in my May Favourites post over at Ashleigh Engaged.

15 YA books all ‘grown ups’ should read