Lovely idea for a novel with some potentially great twists, but they’re just too easy to predict. 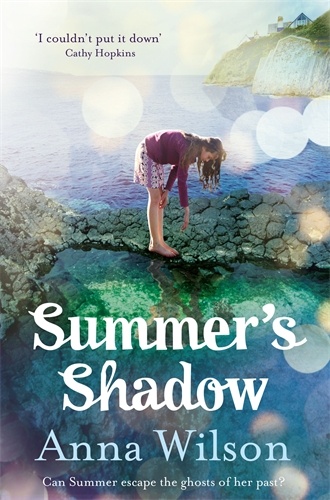 Following the sudden death of her mother, Summer has been torn away from London and sent to live with relatives she never even knew existed. Now, stuck in a creepy old mansion in Cornwall with a family of strangers, she’s never felt so alone. Her uncle seems anxious, her aunt has moved out, and her cousin appears to be going out of his way to be mean.

Scared, lonely and feeling haunted by a series of strange occurrences, Summer begins to spend more and more time at a beautiful sheltered beach she discovers nearby. But she’s not alone. Zach, a local boy, seems to think the secret cove is his too.

Can Zach help Summer escape the ghosts of her family’s past? Or will she remain haunted forever?

I guessed the entire plot of Summer’s Shadow within the first few chapters, so I didn’t particularly enjoy this novel, unfortunately. I love the idea behind it, I adore the Cornwall mansion setting and the characters had the potential to be really interesting, but when you are 99% sure that you know what the secret that the entire story revolves around is, it’s simply frustrating to read.

That’s not helped by the slow moving plot, in which nothing much actually happens. I would have loved to see a bit more character development throughout the middle portion of the book, when things get rather dull and unexciting. I don’t feel like we really got to know Summer or Zach, and Tristan (Summer’s uncle) is a brilliantly intriguing character but none of my questions about him were answered.

It’s a real shame because Summer’s Shadow could have been a hauntingly beautiful read. I think this is the first YA book written by Anna Wilson, who usually writes books for younger readers, so I’ll be interested to see what she comes up with next nonetheless.